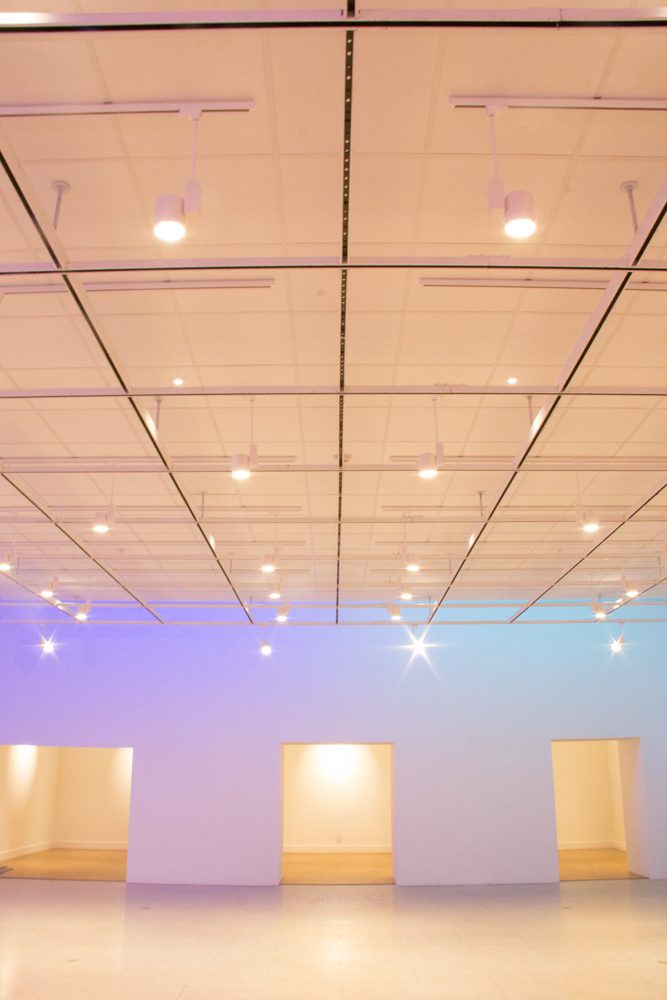 Clean white walls and the smell of newly painted surfaces currently set the scene of the Sheehan Gallery. The empty room’s bare walls make the space seem somehow bigger and different—and it is. The gallery underwent renovations this summer, and while they are not immediately striking, they were much-needed to improve the function of the space.

The gallery renovations have mostly to do with safety and utility. A new sprinkler system and fire suppression system were installed, and the water-stained ceiling has been replaced. The glass enclosure at the entrance has been removed to make the space more inviting. In addition to that, a new lighting system and numerous electrical outlets have been put into place. The lighting system has been one of the renovations’ highlights because it allows for multiple colors and dimming.

Kynde Kiefel, Exhibition and Collections Manager for the gallery, and Daniel Forbes, Director of the Sheehan Gallery, are especially pleased with the new lights.

“[It was important to renovate the gallery] to keep it a lively dynamic functioning space,” Kiefel said. “It was high time that we got a lighting system that we have a little more freedom and options with.”

Forbes added that the new lighting is also more sustainable.

“It’s probably going to cut our energy usage by over half,” Forbes said.

Forbes also commented on the ways that the space has been adapted to be a better space for artists to display their work.

“The space wasn’t really set up for the technology that’s being used by contemporary artists,” Forbes said. “It didn’t have the kinds of projectors or computers or things that are being used by so many artists today, so there was the addition of more electrical outlets … [and] we’re going to have a programmable lighting system.”

Dan Park, Director of the Physical Plant, said that the renovations were the last step in a three-phase project at Olin. He also explained its funding.

“The budget for the project was around $193,708, and … the renovations were funded by the Lifecycle Fund,” Park said.

The Lifecycle Fund supplies the means for renovating and updating structures that have gone through their lifespan. A large part of it is improving the efficiency and sustainability of such structures.

Both Forbes and Kiefel have high hopes for what the renovations will do for the future of the gallery.

“A huge hope is that with updating the safety … we will then be able to host more touring shows—expanding on interesting and diverse shows from elsewhere,” Kiefel said. “That’s always been a challenge because there are certain systems and seals on doors and things that were keeping us from, if we had the funding, borrowing stuff from other institutions …This [the renovations] opens the door to being a fully updated and safe space for visiting art and artists, so I think it will expand our pool as far as what we can choose from for art that can exist in the space.”

The gallery is now closed for the fall semester, but will reopen in January with a show featuring the art of Whitman’s studio art faculty. In the meantime, gallery events will continue in other locations. A schedule of these programs including artist talks, receptions and new exhibits and installations across campus is posted outside Sheehan Gallery and online on the Whitman College events calendar.