“Songs of Youth and Joy,” A Unique Collaboration Among Walla Walla Musicians 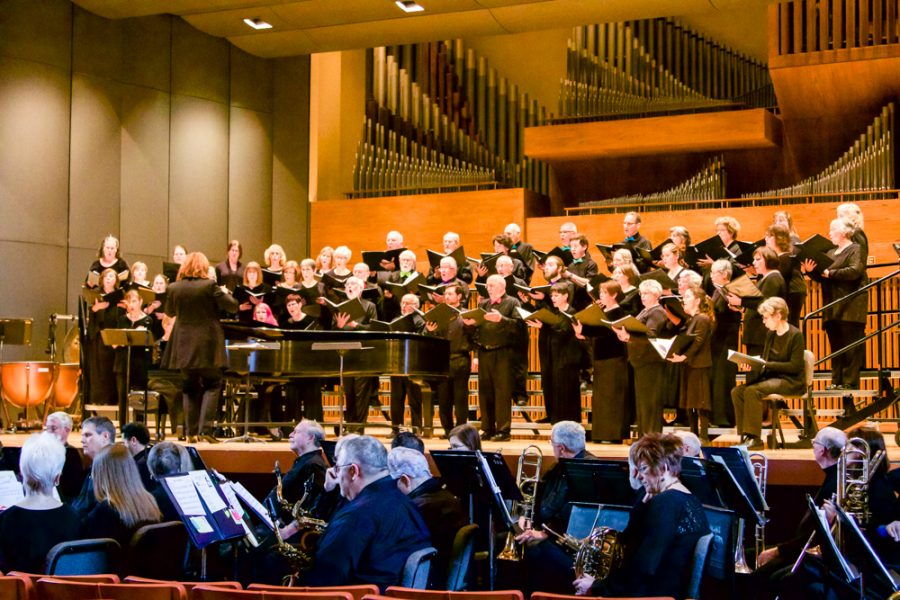 Beginning with an a cappella performance, the Wa-Hi choir Belles Voix sang their first piece, “Watane,” a beautiful harmonization of voices with sounds of nature. The concert then progressed  to a piece titled “Walla Walla,” performed by the Choral Society, which portrayed the sense of home that the blue valley of Walla Walla gives to its inhabitants.

The wide-ranging repertoire included two configurations by local composers, encompassed various styles of music, including several pieces in foreign languages, and incorporated different types of instrumentation. In performing such an extensive repertoire, the concert was sure to provide entertainment for listeners of all ages.

Riikka Pietilaninen-Caffrey, director of the Walla Walla Choral Society, explained the intention behind the concert.

“We wanted to make this event more multi-generational, bringing together different ages, different groups from different parts of the town and really making it a community event,” Pietilaninen-Caffrey said.

Pietilaninen-Caffrey, along with directors Colleen Ochocinski of the Walla Walla High School choirs and Jackson Maberry of the Walla Walla Valley Bands, worked to create an enjoyable event that could be extended to the entire Walla Walla community. They felt this could best be achieved by replacing the ticket sales with a request for canned good donations for the local food bank. In doing so, the concert would be free to all and allow community members to show support for Walla Walla.

“We need a concert that is available to all without ticket sales,” Pietilaninen-Caffrey said. “We’re trying to bring in this whole idea of inclusivity, that if it’s a free concert, [it’s] more likely people are going to go to the concert and it will really be offering music to everybody.”

Ochocinski described this concert as transformative for her students.

“[This concert] gives the students another opportunity to perform and make music together,” Ochocinski said. “They love sharing their talents with the community.”

She also emphasized that this concert is a unique learning experience that allows students to improve their performing skills and to learn from other musicians within the community.

“It builds a sense of community and pride in choral music and the work that we do,” Ochocinski said. “[This concert is] about celebrating the joy of music [and] having all the people collaborate with the rising generation. [The audience] gets to experience music from the elementary level all the way up to the collegiate level.”

The audience is not excluded from this beneficial experience as they become a part of the experience. With performers from all over Walla Walla, the audience members are interconnected with different facets of the community simultaneously to create a unique experience for all who attend.

Heather Youd, who attended the concert, felt that the collaboration of the different music groups created a captivating experience for the listener.

“The collaboration between the different musical groups makes the concert a more unique experience,” Youd said. “[The directors] gave background information about each piece that was performed. It was extremely interesting and helpful in understanding a piece.”

The directors highlighted the powerful meanings or humorous backgrounds of each piece they performed. With the aid of this context, the audience could engage more thoroughly with the moving lyrics or better interpret the emotions that the pieces were attempting to convey, helping make the event into a concert for the entire community.

“Songs of Youth and Joy” showcased the many sounds Walla Walla has to offer, making the concert an unforgettable experience.