“Kaleidoscope” is a unique music experience 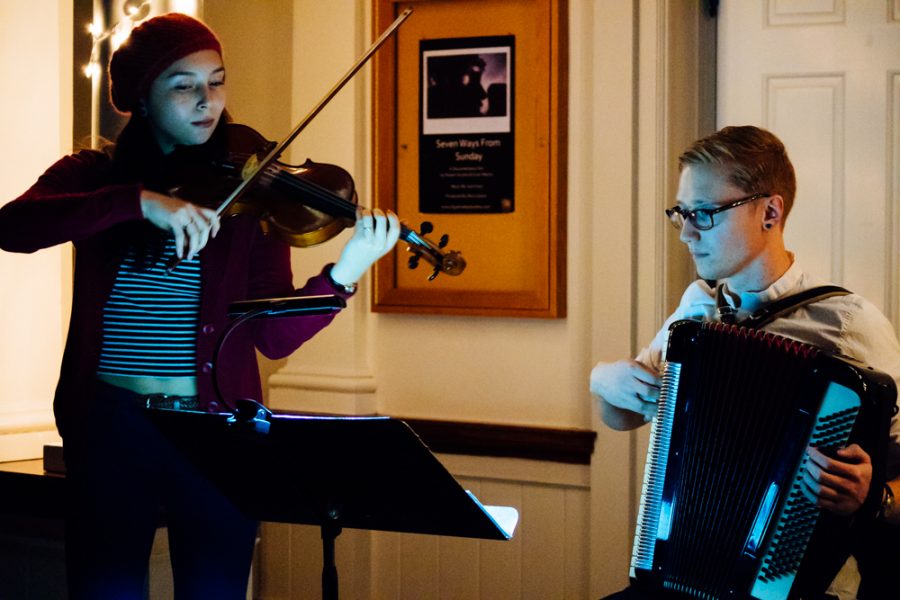 Bagpipes, accordion, strings, Ghanaian drums, guitar, electric bass, brass and singers are among the many musical sounds that came together for a unique performance in Hunter Conservatory. “Kaleidoscope,” a concert featuring a variety of ensembles and musicians from Whitman College and Walla Walla Community College, took place on Sunday, Nov. 6, and was far from an ordinary concert.

The audience was seated in the middle of the lobby just outside Kimball Theatre, while the ensembles played from the balconies surrounding them. Sometimes, the ending of one ensemble’s piece would overlap into the beginning of another ensemble’s piece; other times, there would be a brief pause. The result was a near-continuous stream of music, infused with creative lighting.

Professor Kristin Vining, who teaches at both Whitman and WWCC, planned and coordinated “Kaleidoscope.” She explained the reasoning for the setup.

“Since the audience is in the middle of the room and sometimes the performers are with them, you’ll be surrounded by the music instead of at being at a distance,” Vining said prior to the performance. “[The audience can] really be immersed in the music and even when people are playing from the balconies, it will fill this whole space.”

Walla Walla Chamber Music Festival holds a similar annual concert called “Collage,” and Walla Walla University holds one called “Prism.” This is the first year that Whitman has done such a concert, choosing their own unique and fitting name of “Kaleidoscope.”

“The idea of a kaleidoscope is that you have many colors and that the colors keep changing,” Vining said, “so we’re applying that to music, where it’s many musical colors, and those keep changing.”

Professor Beth Szczepanski, a music professor at Whitman and founder of the Whitman Ghanaian Ensemble, both instructed and performed in the concert.

“The ‘Kaleidoscope’ Concert is a chance for the community to get a sense of all of the great music that goes on at Whitman,” Szczepanski wrote in an email to The Wire.

The Ghanaian drumming ensemble was set up in the middle of the audience, rather than being up in the balcony like many of the other ensembles. This is first year there has been a Ghanaian Ensemble at Whitman.

James Graybeal, a member of the Ghanaian Ensemble, was excited for the performance.

“I definitely like the way it sounds like it’s going to turn out,” Graybeal said prior to the event. “It should be really fun to jump around between ensembles and just get a flavor of all the things going on in campus. I personally kind of like the idea of this [setup] better than just a formal performance just because it’s more interactive and it’s less of an us-versus-them sort of thing.”

“It’s an opportunity to perform pieces that you might not do in a more traditional recital,” Vining said.

This non-traditional instrumentation was reflected in many ways, including the electric guitar and electric bass playing experimental music. Similarly, the accordion and bagpipe might not fit in more traditional ensemble, but they got the chance to play with other instruments for “Kaleidoscope.”

Graybeal and Szczepanski said they hoped to see the audience actively enjoying the performance.

“I hope they have fun,” Graybeal said. “I hope it makes them smile.”

The performance was an exciting one, and many audience members appeared to have a good time. It was received with heartfelt applause at the end of the concert, and was, as Vining had emphasized, a unique experience.

“It’s a musical experience instead of a concert,” Vining said. “It’s just a different opportunity to feel like you’re even more a part of the music than when there’s that separation of stage and audience.”

The event ended with a choral excerpt of John Lennon’s “Imagine,” further unifying the performers and audience and solidifying the unique musical experience.