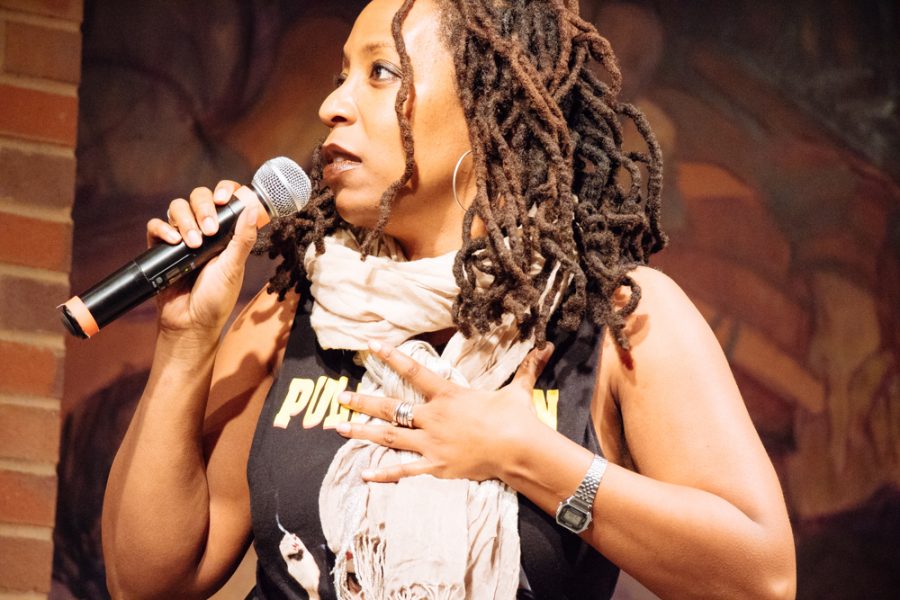 As part of the ongoing Equality Coffeehouse event, FACE (Feminists Advocating for Change and Empowerment) invited a rather unique performer in comedian Gloria Bigelow, who uniquely addressed intersectional issues across the board. Her exuberance and expressiveness brought her comedy to life and kept the audience laughing while tackling contentious issues, from her own perspective as a black lesbian woman, to a predominantly white college audience.

Originally from the suburbs of Pittsburgh, Bigelow made her entrance into the world of comedy in New York City, performing stand-up at well-known venues across the city. Since then, Bigelow has performed both nationally and internationally, as well as appearing on television, in documentaries and in published writings.

Bigelow’s performance was part of this year’s Equality Coffeehouse, an annual event put on by FACE, a club that focuses on many feminist and intersectional issues. Before the event, students had the opportunity to partake in a comedy workshop with Bigelow and eat dinner with her. The event itself started with open mike for students before Bigelow took the stage.

Senior Zoey Kapusinski, FACE co-president, gave insight into the planning that went into the event. This year, FACE chose to deviate from its usual Slam Poetry event, which has been a staple in previous years.

“This year we wanted to go for a little different feel…we wanted to bring some comedy and some levity to campus,” Kapusinski said.

Despite the change in performance type, FACE’s goal for the event continues in a similar tone.

“For every Equality Coffeehouse, we really try to find someone who’s impactful and can kind of bring issues, intersectional issues, to light of general audience, while also being entertaining,” Kapusinski said.

The cosponsorship of other clubs, like the Black Student Union (BSU) and GLBTQ, was invaluable, both in monetary support and in spreading the word across campus.

Sean Hannah, of BSU, spoke about the club’s involvement in this year’s Equality Coffeehouse, focusing on the values of addressing intersectional issues through a single performer.

“I think that it’s important to be able to consider other identities when you are trying to attack an issue such as sexism or racism. So I think it’s a good opportunity to have someone who is of a minority race and a minority sexuality,” Hannah said.

With this in mind, Hannah hoped this event would raise awareness of the intersectional aspects of any issue.

Like many comedians, Bigelow’s show drew inspiration from her personal experiences. For her, this meant many of her jokes centered on black and lesbian elements in her identity.

At Whitman, a predominantly white school, addressing of issues of race can be an intimidating prospect. Bigelow’s show used humor to bring these issues to into focus in an accessible way, allowing the audience to address contentious issues head-on.

Ella Manashil, a first-year at Whitman, was one student who attended the show. She commented on Bigelow’s ability to relate with the students through jokes about college.

“I thought the college stuff was really interesting because we all kind of relate to that so it was funny to hear her experience and her take on what we all do,” Manishil said.

However, Manishil noted that less-relatable aspects of the show were equally important, as they brought a different perspective to the school.

“I think it’s really important to bring that attitude and opinion to a school like this, where a lot of people might not hear that stuff a lot, with the population being so white and upper middle class,” Manashil said.

Through her unique ability to relate with her audience while bringing a different perspective, Bigelow’s performance kept people laughing while tackling important and current issues head-on.