“Art of the Deal” movie mocks Trump’s crass side

Political humor is at its most bizarre in the Funny or Die production, “Donald Trump’s The Art of the Deal: The Movie.” The film, released on Feb. 10, 2016, is a parody that highlights the absurdity and crudeness that has come with this year’s controversial Republican presidential candidate.

The film is a movie-within-a-movie, advertised as a “lost” film originally made by Trump. 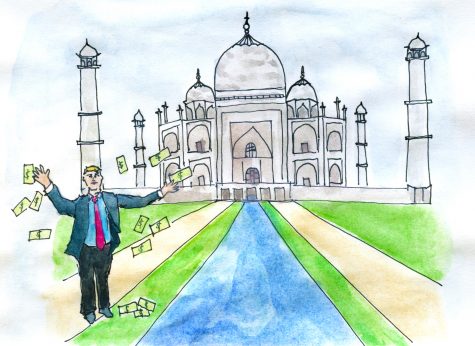 The movie centers around Trump’s desire to make a deal with Merv Griffin to buy the Taj Mahal Casino and Resort in Atlantic City. Throughout the movie, a young boy sits in Trump’s office with him and the scenes switch in and out of the present, as Trump tells the boy about his successes in the past, while trying to negotiate the Taj Mahal deal in the present.

The film is divided into chapters. Examples include “Chapter 2: The Art of Defeating Totally Bogus Discrimination Lawsuits” and “Chapter 5: The Art of Marrying a Gorgeous Immigrant.” It also features “Trump cards” with titles such as “Use Your Leverage,” “Fight Back” and “Know Your Market.”

Johnny Depp stars as Trump in the film, proving surprisingly accurate in appearance and mannerisms, even down to the accent.

Trump’s language is simplified even more than it is in real life, but not to a point where it becomes unbelievable. For example, his explanation for why the Hilton family failed to get into the casino business is simple: “They were too stupid.”

The film also includes many stilted arguments between Trump and others that are filled with jabs and insults, as well as short, clipped, back-and-forth sentences that capture Trump’s style of argument and his willingness to engage in petty fights. They reflect the real-life Trump the public has witnessed throughout the debates.

Some elements in the movie are notably cringe-worthy, and whether or not that is a good thing is debatable. There is a generous amount of crass humor, and there is no shortage of rude or gross comments made by Trump regarding women and sex. While some may argue that tasteless humor is essential to capture Trump’s disregard for others, it may also deter some audience members from watching the whole film. This element of raunchiness is, however, especially relevant considering recent revelations regarding Trump’s objectification of women.

Trump’s hypocrisy and general ridiculousness is captured particularly in how he treats Ivana Trump, his at-the-time wife, played by Michaela Watkins. His rudeness and dismissiveness toward her is at an appalling level, even as he keeps claiming that he thinks Ivana is great. He repeatedly silences her any time she starts to speak, and makes repugnant comments about her even while she is in the room. Such display of their relationship is effective in making fun of Trump, but a concern is that it may be a bit insensitive to Ivana.

The movie has a rather confused ending; perhaps the makers of the film were not quite sure how to end it. It remains up to the viewer to decide what the ending means, if it does indeed mean anything.

A person craving comedy in this time of a disheartening election season may wish to take a look at “Donald Trump’s The Art of the Deal,” as it not only makes fun of Trump but also accurately portrays his faults, which need not be exaggerated too much in the film since they are already exaggerated in real life. However, viewers should be aware that the 50 minutes of fun during the movie may turn into despair when the movie comes to an end and the realization that the potential future president of the United States portrayed in the movie is just as outrageous in reality as he is in the movie.