Spotlight On Students: A week of Humans vs. Zombies 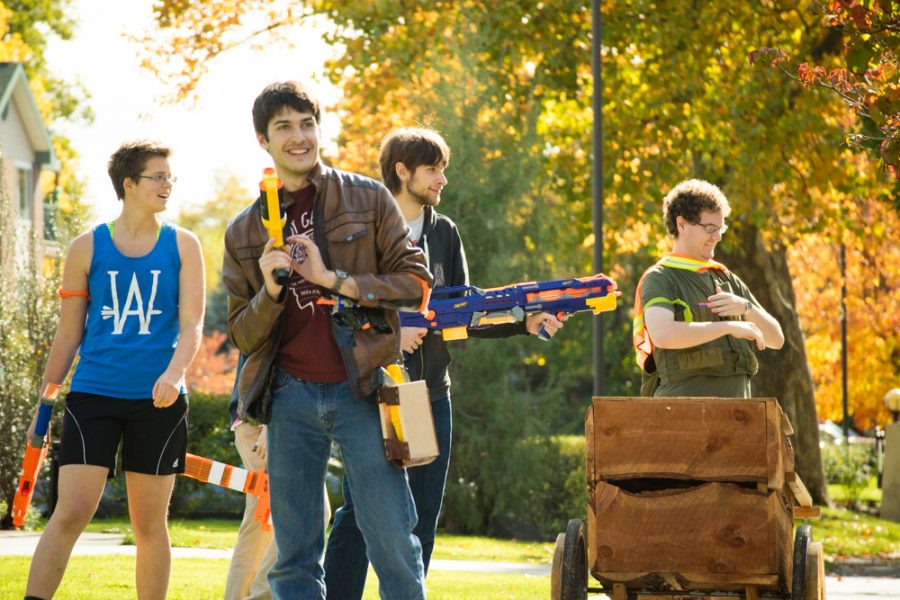 Zombies lurked on Ankeny Field and the Four Horsemen of the Apocalypse rode through Whitman’s campus last week as this semester’s week-long “Humans vs. Zombies” game commenced. Around 40 students participated in the game, marked by bright orange bandannas, nerf guns and a simulated hunger for the flesh of the living–or, at least, a desire to tag as many human participants as possible.

In “Humans vs. Zombies” (frequently abbreviated as HvZ), humans armed with nerf guns and socks must defend themselves against the rising population of zombies, completing various missions throughout the week to earn benefits for themselves, while the zombies attempt to convert them to their own side (by tagging them) and earn some benefits for themselves. The game ran from Sunday, Oct. 16, through Saturday, Oct. 22, culminating in a final mission for which the victorious party won the game.

HvZ is hosted by the Whitman Action Games club, which is concentrated on creating both the week-long game and various smaller HvZ events throughout the semester. The club’s president is senior Jack Eiford, who has been playing the game since his first semester and is in his third year of being president.

“I’m someone who has a big imagination,” Eiford said. “[HvZ is] like playing pretend, like you did when you were five, just with like, really advanced rules.”

Eiford first learned of the game while attending high school in Bellingham, during which he learned of the game as it was played by students at Western Washington University. Having participated in some of the WWU games, Eiford was excited for HvZ at Whitman College, though he noted there is quite a bit of difference between the two schools’ renditions of it.

“There aren’t as many players [at Whitman],” Eiford said. “So the game rolls over to where the zombies have control really fast…whereas at these bigger schools like Western, y’know, it’s normal for humans to win, it’s harder for zombies to win.”

Despite the lower chances of humans at Whitman, Eiford prefers the human side of the game.

While Eiford prefers his humanity, his fellow moderator Grace Pyles very much enjoys the zombie side of the game.

Pyles helped design the plot of the week-long game, which revolved around the Four Horsemen of the Apocalypse. The first mission centered on rescuing captured prophets of the apocalypse from the clutches of the zombies, while subsequent missions involved dealing with war, famine and pestilence, as they assisted the zombie hordes, while Death took the side of the humans.

For Pyles, these missions are among the most fun parts of HvZ.

“I really like the missions because it…brings everybody together in the same place,” Pyles said. “During a mission, you have a set objective, and you have to complete it in a set amount of time, and humans know that there are zombies there, and zombies know that there are humans there. And it’s just a lot more action.”

First-year Ian Hawkins agreed with Pyles’ assessment of the missions, having greatly enjoyed the Tuesday War mission (in spite of losing his humanity during the process). He enjoys the game in both the human and zombie forms.

“I feel like human is more valued just for its scarcity–the fact that you can lose your humanity makes it more valuable–but once I became a zombie, I really enjoyed being the thing feared, rather than the thing that I had been afraid of,” Hawkins said.

Hawkins, who had hosted condensed versions of HvZ with his friends before college, had long looked forward to a college HvZ game, and was not disappointed with Whitman’s week-long version.

“The week-long format is so different,” Hawkins said. “[Playing at home is] very different from having your normal life going on and then also having the zombies in it, and defending yourself is part of your day-to-day routine.”

“I can’t wait for next semester,” Hawkins said. “I wish [the games] were more frequent.”

The future looks bright for HvZ, with Eiford expressing his excitement for the upcoming spring edition of HvZ, entitled “Humans vs. Zombies: The Musical.” Until then, while the apocalypse will lie dormant, the excitement and the adrenaline of the game will make for some truly unique college memories.