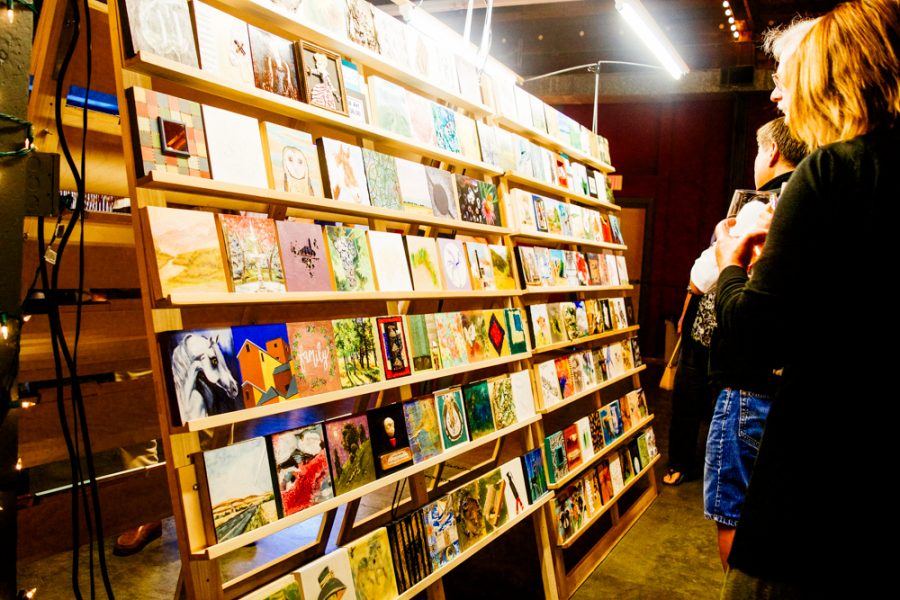 Around a thousand six by six-inch squares of artwork, each unique and different, lined the walls of CAVU Cellars as people milled around listening to music and picking out their favorite paintings. This was the fourth annual ArtSquared event, which ran from Friday, Sept. 30 through Sunday, Oct. 2.

ArtSquared is an art show put on by ArtWalla, a volunteer-run organization devoted to promoting and supporting the arts and art education in the Walla Walla area. Participating artists are given ten small canvases to paint however they choose and are then displayed at the show, each priced at 36 dollars.

Tricia Harding, who was on the planning committee for ArtSquared, explained why this format was chosen.

“We’re trying to make art accessible to everybody,” Harding said. “It doesn’t matter if you’re buying one of the best-known artists in Walla Walla or someone who’s a Whitman College student; they’re all the same price.”

Harding also spoke of the reasoning behind the event.

“The purpose is a fundraiser for ArtWalla,” Harding said, “but it’s kind of multi-pronged in that we not only want to raise money, but we also wanted to create a community both for the visual artists that are working in the community, to bring them together to work on a project.”

Harding explained that some of the money raised goes toward keeping ArtWalla in operation, but the bulk of the funds goes toward supporting arts education.

ArtSquared has been very successful in the past and continues to grow. The first ArtSquared event attracted around 60 artists. This year, the number is close to 110 and this number includes returning artists as well as new ones. According to Harding, around 40 percent of involved artists this year are first-time ArtSquared participants.

A number of these artists are from Whitman. Charly Bloomquist, a photography professor at Whitman, explained why he wanted to get involved with ArtSquared.

“It was an interesting challenge,” Bloomquist said. “It gave me an opportunity to make work that I’d been thinking about for a while but hadn’t explored yet.”

Eric Rannestad, a junior at Whitman, explained that he participated in the show to have fun and to also get exposure.

“You meet new people, and maybe an opportunity will arise from that,” Rannestad said.

Rannestad also commented on the value of ArtSquared as an opportunity for artists to try out new things.

“For the artist, it’s experimental,” Rannestad said, “because it’s a lot of work to produce ten [pieces] but they’re all so small…and so you have fun, get experimental.”

Harding, who also displayed artwork at the show and has also done so in previous years, spoke of it in a similar light.

“I think people end up realizing, ‘Oh that was kind of fun, I used it to try something new, I experimented, I’m doing something I don’t normally do when I’m working on a big canvas,’” Harding said.

This creative move to experiment has produced interesting results in the artists’ works.

When asked what he hoped attendees of the show got out of it, Bloomquist said, “I hope that people who aren’t necessarily consumers of art or aren’t aware of the art community, get excited about it.”

Bloomquist also added some personal insight into the importance of holding visual art events such as ArtSquared.

“Art has the potential to move you deeper politically or socially,” Bloomquist said, “or really alter your conscience, even spiritually.”

In total, 630 paintings were sold, making it the most successful ArtSquared event to date.