The new exhibit shows off a number of local historical quilts - with a lot of painstakingly researched detail! 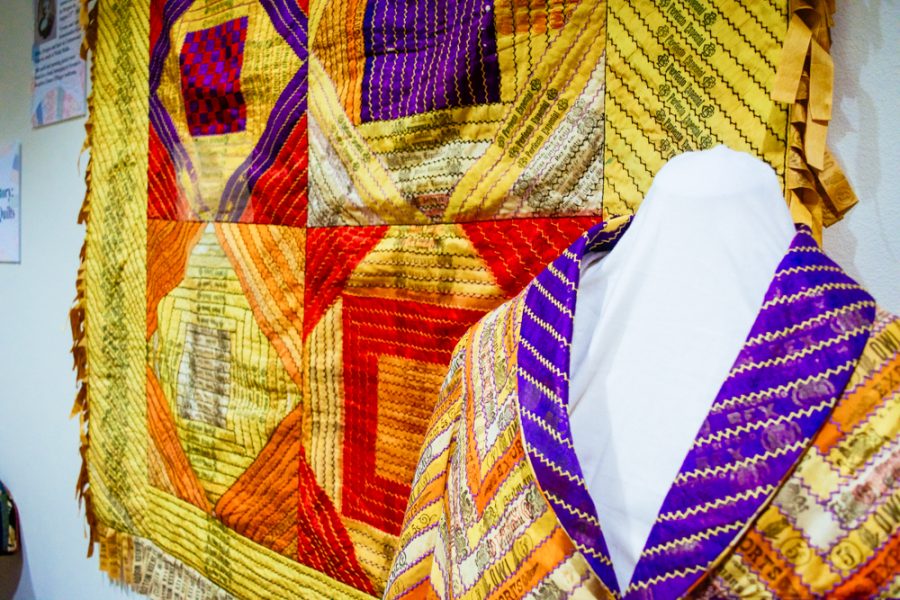 Interesting and unique historical artifacts are abound at the Fort Walla Walla Museum, which specializes in local specimens from the period preceding World War II. Perhaps the most compelling, however, are those that feature in the museum’s rotating special exhibits–and with the opening of “Sewn Into History: A Century of Quilts,” the museum’s staff and interns have gone the extra mile to provide one of their most compelling and detailed exhibitions yet.

The exhibit is the first quilt show at the museum since 2012. It features 21 quilts created between 1840 and 1939. Some adorn the walls of the gallery and others rest folded on tables. Many of the quilts feature short biographies of their creators and some are even paired with dressed-up mannequins representing the women who stitched them together.

Many around the community are excited to have a quilt show back at the museum.

“We had a lot of people that were super excited that we were doing a quilt show in part because we hadn’t had one for a number of years,” Museum Collections Manager Laura Shulz said.

While a typical quilt show is one the museum’s easiest installations, the new show required much more background work to produce a workable exhibit.

“There were enough never-before-displayed quilts that [the staff] did have to write the text and such from scratch,” Shulz said.

Additionally, Schulz and her team took on the task of uncovering the details of the women behind the quilts.

“This was something that we’d hoped to do for a number of years,” Schulz said. “We had quilts that were more promising to be able to obtain the actual information [than in previous years].”

An invaluable asset for Schulz in conducting this research was Whitman senior Groover Snell, who joined Fort Walla Walla Museum as an intern in May and continued through August. Snell worked on a number of projects during the summer, including a project on regional Latino history and setting up a new exhibit on cavalry swords. His skills came in handy when the research process for “Sewn Into History” began.

Snell’s primary work on the exhibition included family history research and looking for obituaries of the women who made the quilts. To complete this, Snell used a variety of different tools like ancestry.com and microfilm from the Penrose Library archives.

Even with these resources at his disposal, Snell noted that difficulties and complications still arose in the research process.

“We were having a really hard time getting information for one lady,” Snell said. “Some of the documents on ancestry.com said she was married at this time and had a kid, and her obituary didn’t mention important facts or had slightly different dates, and the stories we got from the donor were also a little different.”

In that case, part of the difficulties stemmed from the fact that the woman being researched was divorced, which carried a stigma and meant it was rarely mentioned in obituaries.

Despite the challenges, one of the best quilt shows the museum has ever had came to fruition as a direct result of Schulz’s involvement.

“If Groover hadn’t been interning this summer, there’s no way we could have had enough time to do the bios,” Snell said.

Kt Sharkey, the museum’s Store Manager, found many interesting details in the quilts on display.

“What I found most interesting[…] is all those tiny tiny little stitches,” she said. “When I think of a quilt I think of things that are pieced together, which is what a lot of what those women did, like fifty million little tiny stitches to piece the whole thing together.”

Sharkey also noted the importance of the “extra additions” such as the biographies and mannequins.

“It gives a face to the people that made it with the biographies, as well as what they made the thing on, like why there’s different sewing machines in there, and the dress the woman wore, and that sort of thing,” Sharkey said.

While the 21 quilts on display fill up the entire gallery, there are many more in the museum’s collection, allowing the museum to be self-sufficient for the current show.

Snell, who continues to work for the museum as a community fellow, recommended the internship to other interested students.

“[The museum has] had good experiences with Whitman interns, so I think they would be happy to have more,” Snell said. “It’s definitely a good opportunity for any Whitman students.”

“Sewn Into History: A Century of Quilts” is now on display at Fort Walla Walla Museum, where it will run through the end of the year.