KWCW Show of the Week: The Minority Report

Seniors Gladys Gitau and Shireen Nori discuss issues and events relating to students of color and LGBTQ students with humor and music. 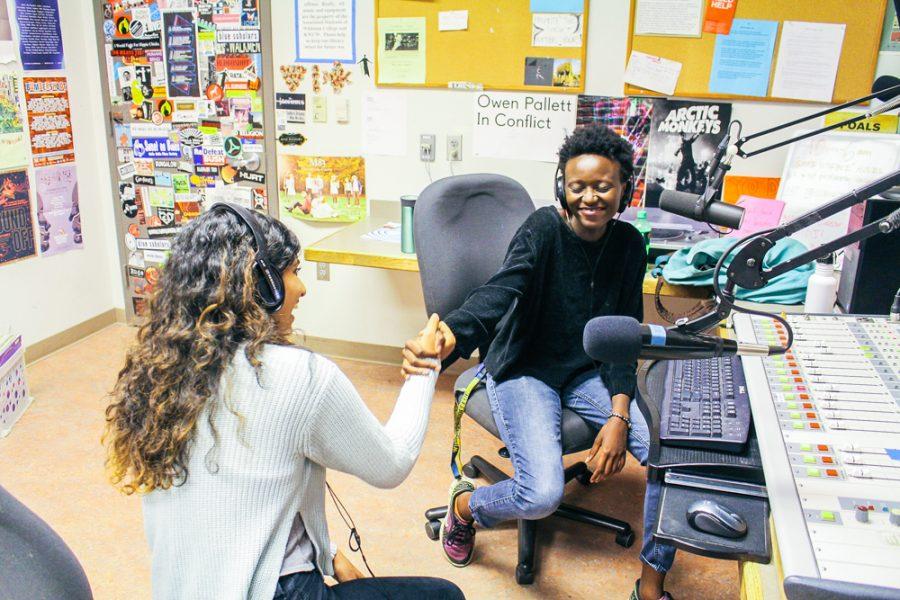 For senior politics majors Gladys Gitau and Shireen Nori, the fact that they would be graduating a mere semester after beginning “The Minority Report” was not an issue in deciding to start the show.

“We had been talking about doing a radio show for the past three years, and it never worked out,” Nori said, citing various scheduling issues and their own study abroad commitments. “We were finally able to get a slot this semester.”

According to Gitau, “There was a certain … counterculture we existed [in] as … students of color on [the] Whitman campus, that never really got any [radio] play or any recognition or any visibility.” Their show, therefore, was designed to run contrary to this apparent voicelessness, and spread the message that, in Gitau’s words, “the POC kids are still alive, and they’re doing events, so you should check them out.”

In choosing the show’s name, Nori stated: “We were looking for something that was gonna be kind of catchy and grab people’s attention.” The fact that “The Minority Report” shares a title with a 2002 Tom Cruise film did not go unnoticed by them; as Nori points out, upon learning the show’s name, “People are like ‘the Tom Cruise movie?’ And we’re like no, just two brown kids trying to have a radio show.”

A typical episode of “The Minority Report” begins with a shout-out to the FCC – a response to message they received from the organization early on stating that the show was being monitored – and then features a segment called “Woke Folk of the Week.” According to Nori, “It’s like essentially the person who’s like most ‘woke,’ and it can be anyone.” Past persons featured in this segment have included DJ Khaled, professors and persons involved with the Power and Privilege Symposium and the Freedom Songs Concert.

After that, Nori said, “We play a couple songs – something that we’re feeling that week.” The songs are usually themed to whatever guest is visiting the show that week. The hosts then engage in conversation with the guest(s), who discuss what they do and why they’re appearing.

For Gitau, it’s imperative that the show “is discussing Whitman as a space that’s important, that supports but also sort of ignores students of color, queer students, low income students and talking about what is our relationship to the campus.”

Getting the chance to interact with students from outside Whitman was a particularly memorable show for the duo. “We had a couple friends who were in town who came to see Power and Privilege,” Gitau recalled. “[We talked] to them about what the conversations are like on their campuses, and what are they doing to stay active on their campuses to combat the same things that we are here.”

“Every show for us is kind of special because it … usually centers around something,” Nori said. “It’s not just about us, it’s about inviting our friends, inviting community members, having people on the show who have something that could really uplift or enhance that show or, just in general, the topics we’re discussing.”

Speaking of KWCW, Nori said, “There’s space for creativity, and there’s space to like, say what you want you want to say, and engage in discussions … that push boundaries.” Additionally, according to Nori, “It’s really fascinating and kinda fun for us to think about the fact that like, this is Walla Walla radio, right, so it’s not just Whitman students and Whitman community members that are listening to it. Somebody can turn on the radio on Thursday night at 9:00 p.m. and hear the both of us talk about something like intersectionality.”

As to who should listen to the show, Gitau stated, “I would recommend it to everyone because I think … there’s a lot of pieces of it that are relatable.” She continued, “[We] talk about things that are relevant, whether that’s on campus or in the world. So even if you don’t know what we’re talking about, you can relate to something that you’ve heard or something that you know for yourself.”

Addressing their show’s limited run, Gitau added that, “We just hope things like this continue happening and the people have the bravery to not only speak out against oppressions, but also have fun, right? Like don’t just sign up for doing emotional labor … have a radio show and hang out and like do things that challenge you creatively.”