For almost two decades Foundry Vineyards has brought art and wine together. 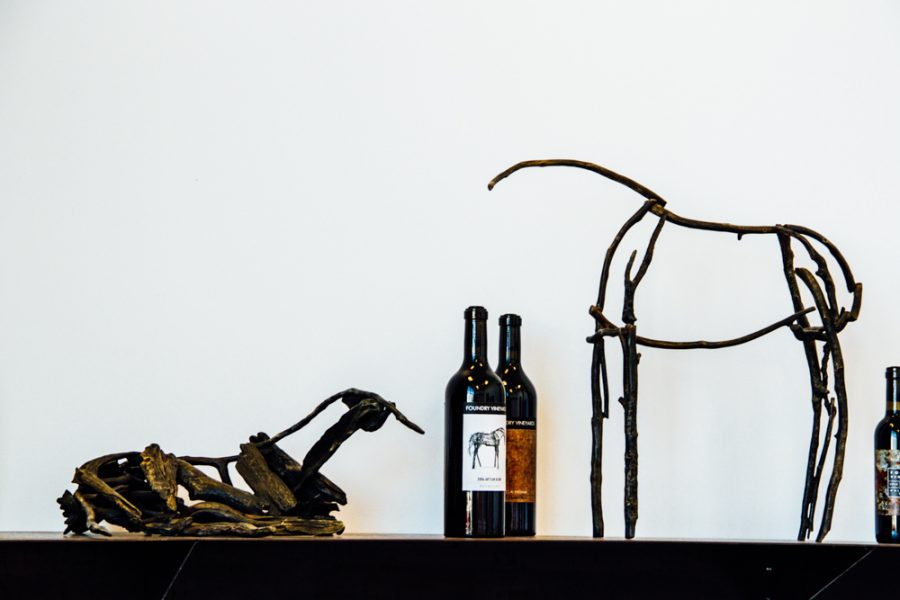 For almost two decades Foundry Vineyards has brought art and wine together. Foundry, who prides themselves as “a creative blending of fine wine and contemporary art,” has quickly become one of the best places to see art in Walla Walla–and it’s completely free.

Foundry Vineyards was founded in 1998 by Mark Anderson on three and a half acres of land just outside the city of Walla Walla. The business expanded, and in 2003, Foundry produced its first vintage with a label designed by world-renowned artist Jim Dine. In 2013, the Anderson family founded the Anderson Foundation for the Arts with a mission to bring art to Walla Walla. Many of the pieces seen on Whitman campus are due in part to their funding. The business is still run by the Anderson family. Patty and Mark Anderson’s two children, Jay and Lisa Anderson, now manage the art gallery.

Although Foundry Vineyards is foremost a wine business, art is the Anderson family’s first love. Mark Anderson was the founder of the legendary Walla Walla Foundry, a studio space located near the vineyards, where well-known artists such as Deborah Butterfield, Dale Chihuly and Kehinde Wiley have worked. “We have a really incredible arts scene in Walla Walla, and the Foundry is one of the preeminent workshops,” Anderson stated. All members of the Anderson family studied art in college, with Mark Anderson majoring in studio art at Whitman in 1978. Their deep abiding love of the subject shows through in their vineyard.

The Foundry Vineyard is a prominent feature on 1111 Abadie Street, a modern marvel of glass and cement nestled between the industrial buildings at the edge of Walla Walla. The fenced outdoor space plays host to a large sculpture garden where events are held. The inside is even more striking, as high-arching ceiling highlights the art below. The current exhibition, “Exploring Fragility and Transience” displays pieces from ten Japanese “Mokuhanga” printers. “Mokuhanga” is an ancient form of Japanese printmaking using water-based dyes. The pieces have come from all over Japan and were brought over with the help of the new Walla Walla Mokuhanga Center.

This task is not always easy. “It can be difficult arranging pieces, particularly from distant places like Japan or China, the Ai Wei Wei exhibit must’ve taken one or two hundred emails, but you know, it was worth it,” Anderson said. Ai Wei Wei’s “Refraction,” the fruit of these labors, was installed outside Whitman’s studio art building last summer.

The Foundry has big dreams which span beyond the borders of Walla Walla. “We have a private collection of art, and one day, in the future, we’d love to display it some sort of public spaces, like community centers of other colleges, we really just want it to be seen,” Anderson said. Decades and generations on, the original mission of Foundry Vineyards lives on.