Taking on Shakespeare is a daunting task for anyone; but Harper Joy's production of "The Twelfth Night" kept the crowd on the edge of their seats with live music, palpable energy and an active engagement with the audience. 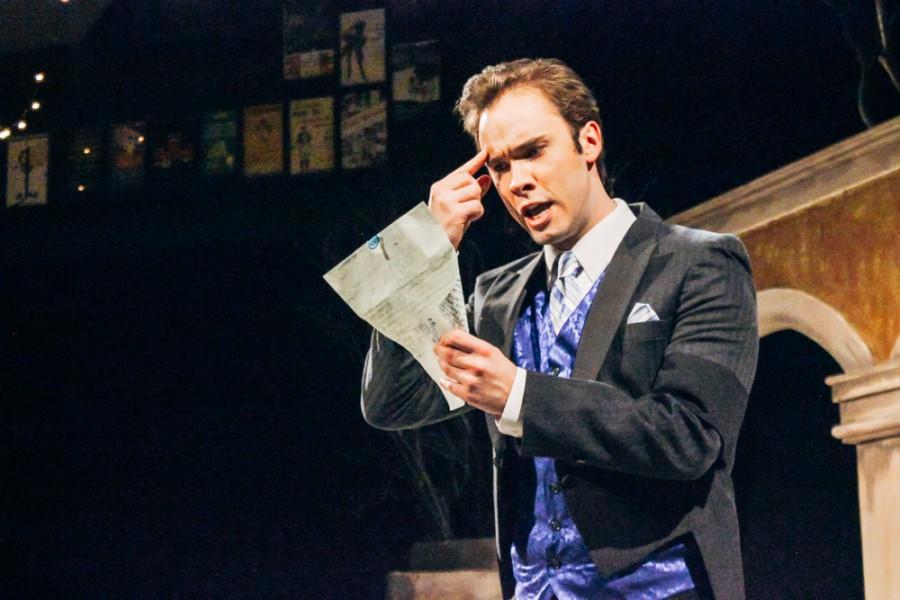 Taking on Shakespeare is a daunting task for anyone, but Harper Joy’s production of “Twelfth Night” kept the crowd on the edge of their seats with live music, palpable energy, and an active engagement with the audience.

The play was onstage at Harper Joy Theatre from March 3-6th. In the Shakespearian comedy, the main character Viola finds herself shipwrecked in Illyria, thinking her twin brother, Sebastian, to be dead. She then disguises herself as a man in order to work for Duke Orsino, with whom she falls in love. Duke Orsino, in turn, is in love with Olivia, who is in love with the disguised Viola. In a frenzy of mistaken identity, gender confusion, and love, the comedy unfolds with humorous and fast-paced action.

One of the trickiest aspects of navigating a Shakespearean comedy is translating jokes to appeal to a modern-day audience. First-year Donovan Olsen, one of the Assistant Stage Managers of the production, witnessed a creative solution to this during the rehearsal process.

“When Malvolio comes out wearing yellow socks and cross-garters it supposed to be a shocking moment. But the director wasn’t getting the reaction he was looking for, so he took Malvolio backstage. We were all anxious waiting for him to come back like ‘what is going on?’ and then Malvolio walks out onto the stage in his underwear so the director got the shock reaction he was looking for.”

In addition to the jokes, another challenge the cast and crew faced was the extra effort required to memorize Shakespearean verse, as opposed to acting in a contemporary play. First-year Matthew Schetina who played Sebastian found this particularly difficult.

“You have to play up your actions and intentions because the language is so confusing at times. I have never done Shakespeare before, and I’ve had to drill it into my mind so much that I could probably rattle my lines off twenty years from now, much to everyone’s chagrin.”

Schetina also felt confident that despite people’s preconceived notions, this production of “The Twelfth Night” would have a fun and lively vibe that the audience would be responsive to.

“The show starts with a party and there’s a spirit of ‘we’re all going to have a grand ol’ time in Illyria’. It will be a good time for the audience. We have a five musician band, and, not only do they play the music, but they play roles in the show. Since they have been working with us the whole time they feel really well integrated. It would seem so impersonal to have recorded music. They’re also the ones responsible for keeping the party going,” said Schetina.

Another unique aspect of this show is its connection to the Encounters curriculum. All Encounters students not only read and discussed “The Twelfth Night” in their respective classes, but also had the chance to see it performed live.

The show opened three nights prior to the public opening night in order for the entire freshman class to have the chance to see it. Olsen sees this opportunity as an enriching part of the Encounters program because Shakespeare is, in fact, “intended to be seen on a stage.”

First-year Bassel Jamali saw the play with his Encounters class and was pleasantly surprised by the production. He said that although Shakespeare can be dry and difficult to read, he found seeing it live to be very enjoyable. For him, the strength of the production was in the effort that was put into detail.

“I found it really surprising and enjoyable that the actors playing Viola and Sebastian looked exactly the same. I actually mistook Viola for Sebastian when she came out with the mustache on. It confused me, I thought that must be the same actor,” he said.

He also touched upon the special experience of being able to read, analyze, and discuss the themes of the play ahead of seeing the performance. Specifically, the role that gender and sexuality play into the the themes and the way in which this was executed.

“They had a good way of examining gender roles and the role reversals. Like the earring that Duke Orsino wore or the way Orsino swooned over love music in a way that we typically associate as more feminine.”

In true Whitman spirit, the play has provoked a lot of great discussions because of the pertinence of “The Twelfth Night’s themes to today. With the beautiful two-level set, which included a staircase, real trees, and fairy lights, which lined the stage and audience, it was hard to not feel a part of the magic. The laughter and audible reactions were consistent throughout the two-and-a-half-hour show. As Schetina predicted, those who attended the performance received it “with an open mind and an open heart.”