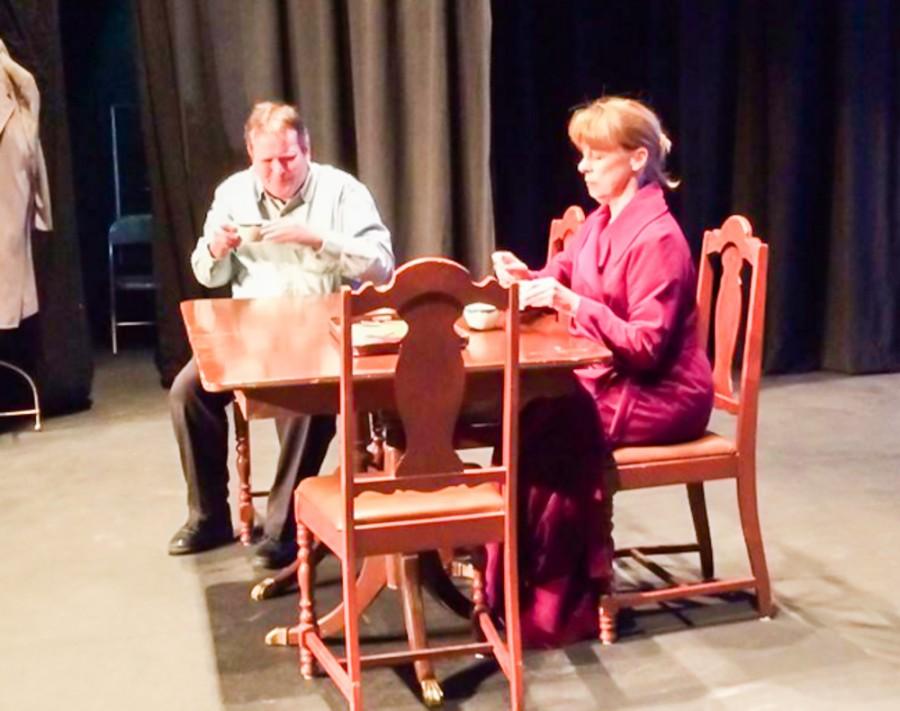 "I've always taken pride in signing my name. I used to do it highschool. I would fill up entire sheets of paper."

“I am the opposite of a stage magician,” asserts the narrator of “The Glass Menagerie.” “He gives you illusion that has the appearance of truth. I give you truth in the pleasant disguise of illusion.”

This notion of truth in disguise permeates The Little Theatre’s performance of “Menagerie,” written by Tennessee Williams in 1944 and directed here by Jeff Schlicher. The play features a cast of four characters; Tom Wingfield, a would-be adventurer who feels increasingly constrained by his job and family and seeks solace in the movies; Tom’s sister Laura, who limps courtesy of a “birth defect” and suffers severe self-consciousness; their mother Amanda, an aging Southern belle who never adapted to the cultural changes around her; and a gentleman caller that Tom invites to their home on the advice of his mother. Additionally, an unseen character exists in Mr. Wingfield, Tom and Laura’s father, who abandoned his family years prior to the play’s events and is represented through a portrait. As Mr. Schlicher noted, the characters and their motivations deeply reflect on Williams himself and his life.

“Most times [in plays], the author of the script gives you a lot of leeway as far as defining these characters,” Schlicher said. “[I]n Tennessee Williams’ work, that’s not the same case. You have to really research Tennessee Williams to know why he wrote these characters the way he did.” Schlicher mentioned that he had done more research for “The Glass Menagerie” than he had done for any of the twenty-one shows he had directed prior.

A key feature of the show, is its use of props, or lack thereof. Addressing this, Schlicher stated that “all the props are determined [by] whether Tennessee Williams really wants them brought to the surface.” He added that “[i]f you work without props, you create [an] energy and the focus is on the acting, not what the actor is doing.” This is particularly notable in a scene in which Amanda is working on Laura’s dress, miming the motions without using actual objects.

“I didn’t want any pins, needles, thread, anything,” Schlicher said. “I wanted…to bring out the connection between Amanda and Laura, rather than what they were doing.”

The cast features Topher Murphy as Tom, Kay Fenimore-Smith as Amanda, Alex Reese as the Gentleman Caller and Kathryn Bogley, a recent graduate of Whitman College, as Laura. All give strong performances, and all four receive a turn in the limelight, assisted in that regard by the limited cast size. Fenimore-Smith is particularly effective as Amanda, playing her as a woman who deeply loves her two children, but can’t resist the compulsion to manipulate and meddle in their lives, to their detriment.

The play’s technical aspects are also worth a nod. In particular, the lighting is practically the play’s fifth performer, as it portrays the role of Mr. Wingfield. Whenever the character is mentioned, the portrait of his face is lit brightly, but even when Wingfield’s face is shrouded, he remains a presence. Depending on the lighting, the portrait can fade into the background, almost unseen, in times of distraction and happier moments. But in the more tense periods of the plays, the shadow of the portrait looms large over the family, standing out garishly from the background even as the face it frames remains concealed.

Asked on whom he would recommend the play to, Schlicher stated that “[a]nybody who likes Tennessee Williams, who likes drama, would love this show.” He added that “[it’s] a good platform for anybody who’s a student of theatre, I think they’d really get a lot out of it.” Lastly, Schlicher mentioned that “[a]ny Whitman students are welcome to see the show.”

“The Glass Menagerie” will be showing at the Little Theatre evenings on Feb. 5, 6, 12 and 13, with matinee showings on February 7 and 14.