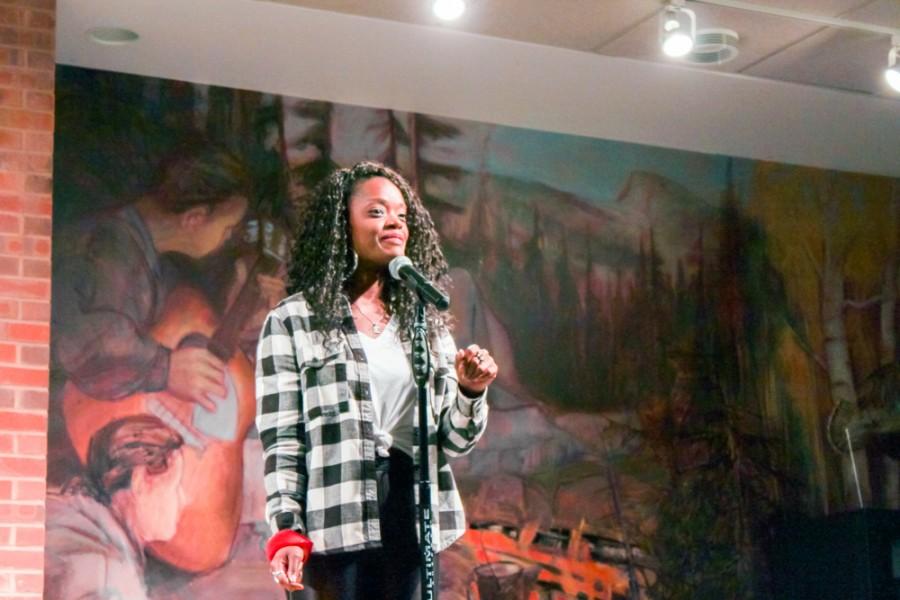 The Reid Coffeehouse was abuzz with activity on the evening of Jan. 30 as students awaited the arrival of Texas poet and educator Ebony Stewart as well as resident Whitman slam poets, Almighty Ink.  While people milled about their usual business upstairs, downstairs a large collective of Whitties gathered, some in chairs, some on tables and yet others leaning over the railings of the stairway, all of them hoping to hear some inspiring and thought-provoking pieces.

Six Whitman poets served as the openers for Stewart, each presenting carefully honed and often deeply personal pieces before their peers. Fed by the support of the audience, these student poets plumbed the depths of their own experience and brought it up on stage.

“We were excited to perform and top open for Ebony,” said senior Linnaea Weld, president of Almighty Ink. “We put together a lineup we already had.” The team is also preparing to attend the Colleges Unions Poetry Slam Invitational competition in Austin, Texas this April. The opening provided opportunity to practice and hone pieces that many members will perform at the national slam event.

Though the pieces explored a wide variety of topics including romance, violence and personal loss, they were all linked together by the passion each writer possessed and the forcefulness with which they delivered their words. These poems served to set the stage for Stewart’s performance.

Like the students who came on stage before her, Stewart spoke passionately about a wide variety of issues. Most of her poems rotated around her experience as a woman of color. In her very first poem of the night she introduced herself as “Ebony Stewart AKA Gully Princess AKA I eat your cupcake” and went on to elaborate the reasons why she became a poetess including the traumas of her puberty and the trials she saw her mother go through. Her most raucous performance of the night was of her piece “Original Eve,” a stunning retelling of the Adam and Eve fable, interwoven with the plight of modern women which received enthusiastic snaps all around. Whether Stewart was probing topics as benign as pick-up lines or as existential as fear itself, she always related it back to her own life experience, giving her poems a deeply personal tone.

Though Stewart now makes her living as a traveling artist, her background in education still serves as the catalyst for her work. She started her set by passing around a bucket along with small strips of paper and encouraged the audience to write down their questions on poetry, sex, relationships and art, promising to answer this one as best she could.

After passing the bucket around, she jumped into one of her most poignant poems of the night wherein she spoke of a former student questioning his own sexuality, which led her to question homophobia as a whole. Stewart’s role as an educator defined the whole night, as she stopped intermittently to give the audience lessons on topics like romance, respect and self-care, all with her own signature mix of humor and earnest concern.

There’s a reason slam poetry is becoming increasingly popular among college students, it’s a forum which allows the poet to express their most intimate concerns in creative fashion.  Through slam poetry, Whitman students shared in seven poets’ anger, laughter and heartbreak, all of them united by the power of poetry.