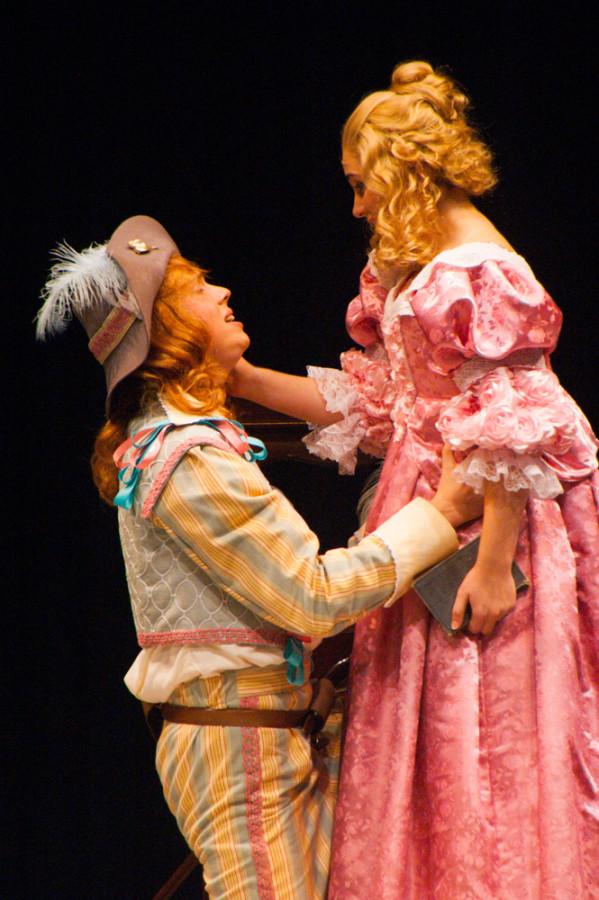 In the Harper Joy Theater from Oct. 22 to 25, Whitman students performed the comedy “The Liar.” Attended by hundreds of visiting parents and students alike, the show offered a fresh take on the original play, written in 1644 by Pierre Corneille.

Nancy Simon, retired Professor and Director of the theater, directed the performance, and put great consideration into its selection, with Family Weekend in mind.

“I knew it was going to be on parent’s weekend, so, yes, I used to like, when I was director of the theater, to have something for parent’s weekend that was very accessible to a broad audience and pretty and entertaining, festive.”

Simon praised both the theatric quality and whimsical, humorous content of the play.

“And our objective with it is, as I’ve stated it to our production staff and cast, is to makes people wet their pants laughing. So that’s one reason. It’s also just a feast of hilarious, brilliant language.”

The play is written entirely in iambic pentameter rhymed verse couplets. But despite this Shakespearean language, Simon says it’s still accessible to any audience.

“The language is totally accessible but perfectly, wonderfully imaginative, it’s just really quite terrific. And it’s a fun story about young people.”

Since The Liar is a farcical comedy, its cast wanted to allow the audience to escape into a world full of farce and comedy. First Year Matthew Schetina said that performers hoped for the audience to leave the theater with smiles.

Junior Kathleen McKeegan played Clarice, one of the main female roles in the play. For her, the play’s fun extended to the performance itself. Working under Simon’s direction, too, proved enjoyable and constructive.

“I loved the script;I thought it was super funny. Also, I adore acting and I’ve never worked with Nancy Simon before so I thought this was a great opportunity. But it seemed fun and it’s a period piece so we got

to dress up in fun costumes which is really fun. I loved the show.”

After five weeks of long hours of preparation for opening night, staff member Nina Vanspranghe was eager to bring the play to life for an audience.

“After five weeks, it’s just like those past days, that I’m starting to laugh less because we are really eager to have an audience, because over and over we are doing the same jokes but no one ever laughs because there is no audience. We’re really all yearning for an audience.”