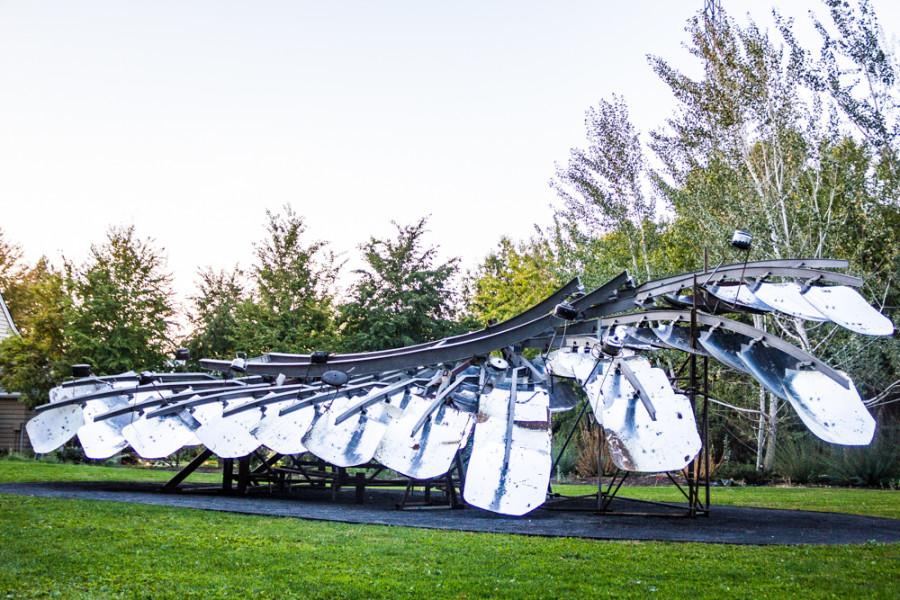 From now until August 2016, Whitman College will be the proud host of “Refraction,” a sculpture by Chinese artist and activist Ai Weiwei.

Located just outside the Fouts Center for Visual Arts, “Refraction” is a spectacle. Around 30 feet long and 12 feet wide, it’s definitely hard to miss; if the size doesn’t catch your eye, the sun glinting off the sculpture’s steel panels surely will.

The piece is made entirely from Tibetan solar-reflective panels, and was designed to emulate a bird’s wing. “Refraction” was originally created as a larger exhibit on Alcatraz Island, and was brought to Whitman through the Anderson Foundation for the Arts with the help of alumnus Siri Smith ’12,  who is now working as a project coordinator for Ai Weiwei.

Ai Weiwei has created many internationally appraised pieces, including works in sculpture and film. He also designed the “Bird’s Nest” stadium in which the 2008 Beijing Olympics were held.

Beyond his work in art he is also an activist and has often spoke out against the Chinese government. In 2011, as a result of his activism, he was detained for 81 days without charge and placed under house arrest. His passport was taken in 2011 and was not returned to him until July 2015. Despite these challenges, he continues to produce art and stand firm in his beliefs.

In addition to “Refraction” on the Whitman campus, Walla Walla will also be home to various other pieces by Ai Weiwei. Foundry Vineyards is also hosting a series of works titled “Rebar and Case,” from September through to October 31. These eight pieces make up only a fraction of the larger series based on the large earthquake that struck Sichuan province, China, in May 2008, and the search for information that followed – though over 5,000 school children died in this disaster, the Chinese government withheld that information, and would not release the names of the deceased.

Ai organized and coordinated a group of volunteers, called the Citizens’ Investigation, that sought to find these names and an explanation for why so many children died.

“This piece is very emotional, really heavy. The topic it’s dealing with is pretty intense, but it ended up being an awe-inducing experience,” said Whitman senior Marlee Raible, who attended the “Rebar and Case” opening event on Thursday, Sept. 3 at Foundry Vineyards.

The environment of the opening, combined with the depth of the piece, was a somewhat stark contrast for some of the attendees.

“It was a very melancholy topic,” said senior art major Megan Gauglitz, who also attended. “There was the impulse to talk deeply about the piece, but it also was a social event with wine and food.”

Many professors noted that Ai Weiwei’s prominence in the art world made his Walla Walla exhibition particularly noteworthy.

“I can’t tell you how excited I am for Whitman to have this opportunity,” said Director of the Sheehan Gallery Daniel Forbes to Whitman Magazine. “Not only is this work by one of the most dynamic and provocative artists on the world stage today, but it is also a stellar example of what Whitman students have done with their studio art and art history and visual culture studies educations.”

In addition to this display, Foundry Vineyards is showing a list of names the Citizens Investigation uncovered and hosting a documentary on the Investigation. “Little Girls Cheeks” will be shown throughout the exhibition.

For more information on the Foundry exhibition, visit foundryvineyards.com, or email [email protected]