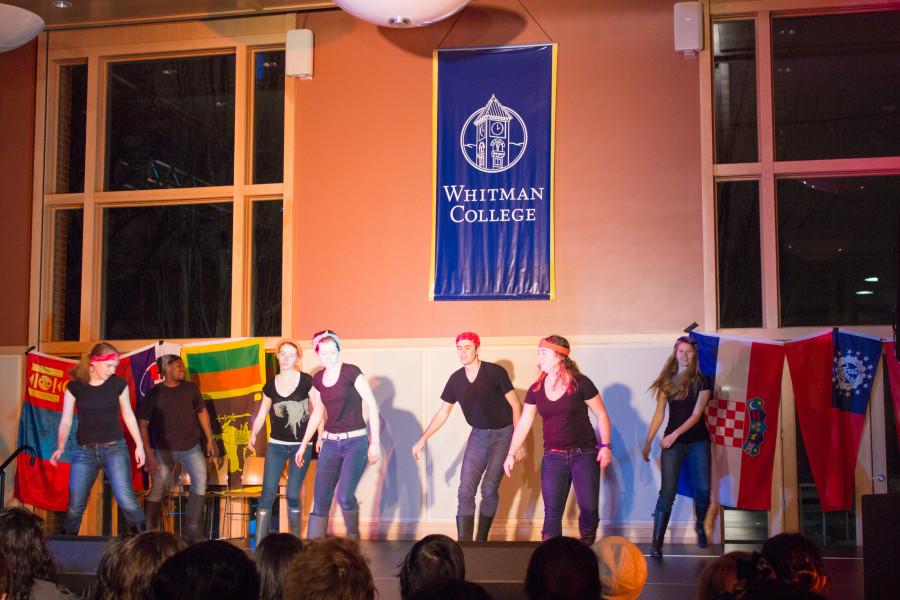 Language, tradition, rhythm and Walla Walla all meet in the southern African dance of gumboot. Led by senior international student from southern Africa, Thabo Liphoto, approximately 10 Whitman students have gathered to perform this unique dance at events on and off campus.

“I wanted to share my culture, where I come from and the kind of stuff we do [in southern Africa] that’s different from here,” said Liphoto. “Now a lot of people are beginning to recognize it.”

“It doesn’t require grace. It requires concentration and rhythm and everybody’s got a little of that,” said sophomore gumboot dancer Natalie Lyons-Cohen.

Sophomores Kristin Nesbit and Jenna Stanley were the first to join the gumboot group when they saw Liphoto’s email to the student body in fall 2012.

“I’ve never been inclined to dance, and I never thought I would join a dance group, but there’s something about gumboot not being a very well-known and not being a mainstream dance [that made me want to join],” said Nesbit. “No one expects me to do it, but you’re just slapping your boots, ya know?”

Liphoto began dancing in a performance setting at his international school in Canada in 2008. He has since organized the club here at Whitman as a first-year and has kept the club alive throughout his junior and senior years, and he believes that gumboot has garnered a greater following this year.

“The amazing feeling is when you’re done and the audience starts clapping,” he said. “We have support, and it has definitely grown this year.”

Due to the repetitive nature of the steps, members have begun to improvise and combine steps that they already know or see on YouTube to make their own dance.

“I taught [the new members] the basic steps, and I told them to be creative with the step,” he said. “It has now taken a different form. It’s true to its original purpose but the steps themselves have evolved.”

Despite Liphoto’s departure after graduation, the club intends to continue recruiting members and performing their unique dance for the years to come.

“We really want more people to join next year, because the dance looks so much more impressive with a bigger group,” said Lyons-Cohen.