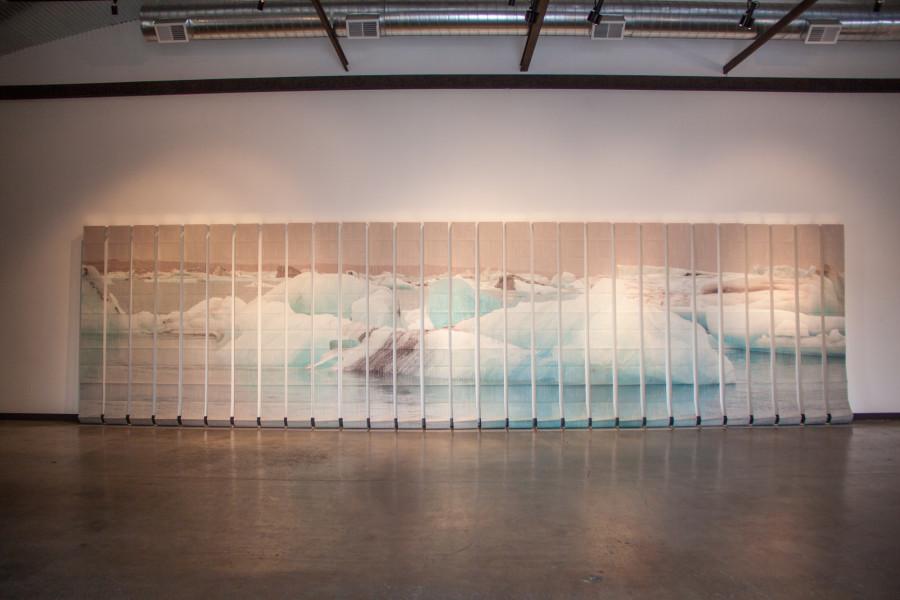 In order to illuminate an important issue, someone might think to create a book in order to put their thoughts on paper. However, it’s unlikely they would create a book that doubles as a 35-feet wide art display. Married artist duo Assistant Professor of Art Nicole Pietrantoni and Adjunct Instructor of General Studies Devon Wootten have done just that, and the finished result is now on display at the Walla Walla Foundry Vineyards.

“I think as artists, we can affect people in different ways … there’s art that’s really clever, or there’s art that affects your emotions,” said Pietrantoni. “I kind of want to have a little bit of both of those things.”

The two pieces featured at the tasting room, “Implications” and “Precipitous,” take the form of segmented strips of photographs overlayed in text. The separated photographs, which fold into books, are placed side-by-side and create a complete image. The complete image for “Implications” is an iceberg, while for “Precipitous” it is an ocean. These photographs were taken in Iceland by Pietrantoni, and the text is taken from poems by Wootten adapted from climate change documents.

“While I was in Iceland, I was thinking a lot about landscape, and thinking about my position as a tourist, and thinking about all this beauty around, but also that idea of â€˜Okay, it’s beautiful, I took the picture, but now what do I do?'” said Pietrantoni. “Now I’ve got to do something with that photograph, and for me working in this way … and the texts from the climate change document really lets me examine beauty in a different way.”

Pietrantoni decided to use a separation between the books and full pieces in order to create a division between the different conceptions we might have of these images.

“What I was interested in is when the image is in this panoramic form, we see the beautiful glaciers â€¦ but it’s also interrupted and sort of fractured for the folds as well as the slices between each book,” said Pietrantoni. “When we fold them up, we no longer see the image. The image is totally abstract.”

Pietrantoni has a background in printmaking, and the two pieces on display at the Foundry Vineyards were made with a more contemporary form of digital printing, which uses a large format inkjet printer (44 inches wide) that is able to print hundreds of feet of paper. Here, the material used was a special Japanese printing paper that is soft, strong and able to fold easily. The two pieces took several tries to correctly print, and overall, Pietrantoni estimates the total time spent on both pieces exceeds 300 hours.

The textual part of the piece, the text on top of the image, is a form of conceptual writing that takes documents from the International Panel on Climate Control that are made to complement the meaning of the visuals.

“Typically I start out with an idea with the image for where I want to go with it, and then [Wootten will] tell me, â€˜Well, find me a text––the drier and more boring the better, just find me whatever text resonates with your image.’ And then he’ll just try to make something out of it,” said Pietrantoni. “The poetry he does is often not aiming to be beautiful.”

Wootten changes text colors to indicate different segments of the poem. The grey background text is the entirety of the original document, the white text is what he chose to bring forward as the actual content of the poem and the text in brackets is text he added to the original text of the document.

“Nicole and I, when considering what to put in these books, wanted something that mirrored the images, that had a similar strategy of creation,” said Wootten. “In the same way she cuts up the landscape and compresses it into books, a lot of times I work with found texts and then I excise words from there, and then create a poem out of those words.”

Typically, “artists’ books” or handmade books like Pietrantoni’s do not feature actual content to their text, especially if the artist has no experience in writing. Here, Wootten’s writing experience allows Pietrantoni to add another layer to her work.

“What we really wanted in these pieces was an added level of conceptual complexity,” said Wootten.

While the two artists work in very different mediums, they try to complement each other by helping to illuminate aspects of the other’s work.

“I like to joke that I don’t have very good taste in visual imagery, but I can talk about the ideas that I see in her work,” said Wootten. “We both are able to see things in each other’s works that we don’t see ourselves, and it’s really productive … it’s a good thing we’re married.”

Both pieces are very large, and Pietrantoni was unsure whether they could even be displayed in Walla Walla. However, the Foundry Vineyards approached her and offered to display her work, making her the first local artist to be shown by the world-famous foundry that has hosted artists like Maya Lin, designer of the Vietnam Memorial.

Pientrantoni believes her work has had a very positive response from the Whitman and Walla Walla art communities. She enjoys that while viewers’ first reactions are based on the physical beauty of the two pieces, the more time they spend with it, the more they examine the deeper layers working together.

“What I generally love about Nicole’s art is its delicacy, smart materiality and visual lyricism,” said Assistant Professor of Art History and Visual Culture Studies Lisa Uddin. “In ‘Implications,’ she is giving us a scale that injects all of these still present qualities with some bravada.”

Pietrantoni is looking toward creating more pieces in this same, large-scale style using a book format.

“The work is very modular, and I think there are ways I can re-imagine how it will be shown in order to display it in different spaces,” said Pietrantoni. “It’s something I’ll definitely continue with, because I know there’s still more to explore and do.”