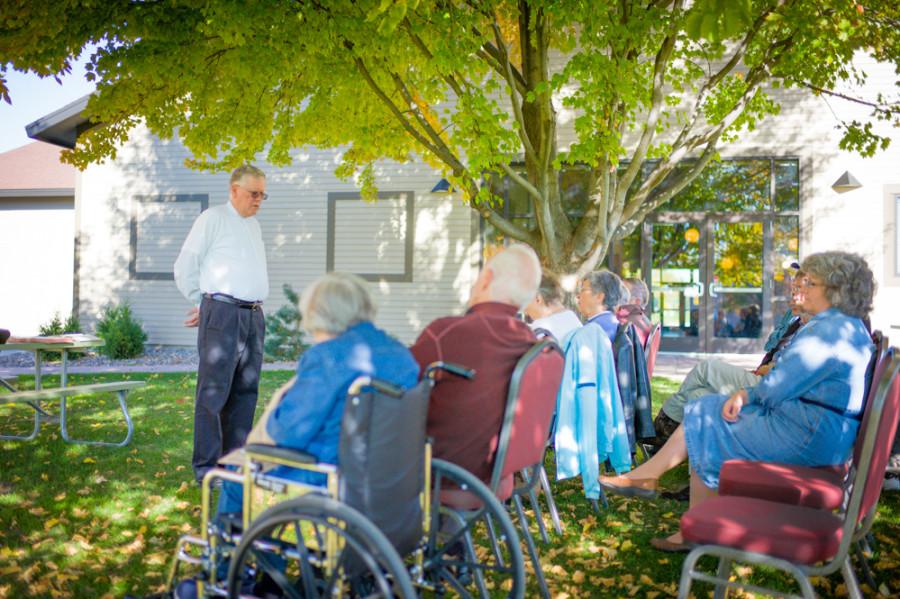 “Let’s start with â€˜Bringing in the Sheeps,'” said Reverend James H. Wilbur, and in a booming voice, he led the crowd in the hymn.

At 2 p.m. on Oct. 20, 2013, Fort Walla Walla Museum was transported back to 1857. On a sunny afternoon, and amidst a fall background, Reverend Wilbur engaged the crowd in a discussion of his specific journey in Walla Walla.

An early Methodist preacher and circuit rider, Wilbur, along with an assigned pastor, founded the first church east of the Cascades Mountains in Walla Walla. At six feet and four inches, Wilbur was a strapping man who helped create good relations with the Yakima Tribe and with the community at large. At 35, Wilbur was already past life expectancy when he arrived in Walla Walla and quickly became affectionately called “Father.”

The man behind the time travel is Chuck Hindman. Even though Hindman is nearly as tall as Wilbur, he is a soft-spoken and humble man, so it is a surprise to hear him belt out “Bringing in the Sheeps” and “Amazing Grace” during his presentation. Hindman, like his alter ego, is a retired Methodist pastor and volunteered at the fort because he had some extra time on his hands.

“I just wanted a chance to support the museum and bring some history to life,” said Hindman.

The leader of the Living History Series, Dan Clark, had been looking for a Reverend Wilbur for quite some time, so when Hindman volunteered, it was like a match made in heaven. This Sunday was the first time Hindman had presented for the Living History Series, but it wasn’t the first time he had played Wilbur. Last year, Hindman presented Wilbur to his church at a potluck at the fort.

“[The Living History Series] seemed like an interesting thing to do,” said Hindman.

To prepare himself for the series, Hindman did extra research on Wilbur including reading the biography “There Were Giants: The Life of James H. Wilbur” by Maurice Helland. In his research, Hindman found some parallels between his life and Wilbur’s. Hindman twice served as a pastor at Pioneer Methodist Church, the church Wilbur helped found. Like Wilbur, Hindman was also a founding member of a Methodist church: Sunrise United Methodist Church in Federal Way, Wash. While there seemed to be many similarities between the two men, Hindman doesn’t think so.

“He was much more conservative than I am on issues like drinking, dancing and acceptance of religious and cultural difference,” said Hindman. “He needs to be judged based on his time, not ours.”

Fort Walla Walla’s Living History Series began in 1998 when Clark’s wife Barbara was appointed the city’s representative on the museum’s board. Finding the fort charming yet under-utilized, Barbara and Clark concluded the way to increase patronage was to create a unique living history company. The Clarks appealed to Museum Director James Payne who agreed, and beginning in June 1998, the Clarks called around Walla Walla to see if they could find any volunteers. By the end of the month, they had around a dozen.

“I talked to a lot of people to find [the characters],” said Clark.

The first series was planned for Sept. 13, 1998, the first day of the museum’s Fall Festival. The initial concept for the series was to have each building in the village represented by a character from Walla Walla’s past. Each character was to interact with visitors and be knowledgeable about their own history. The characters made appearances around town to promote the new attraction in the week leading up to Fall Festival.

When the first day of the series rolled around, the museum was filled with visitors. Alive with music and old-time dancing, patrons stayed later than usual, to the delight of the museum staff. By the end of the day, the Clarks knew they had a success on their hands.

“Walla Walla is a place where good things happen,” said Hindman, at the beginning of his presentation.