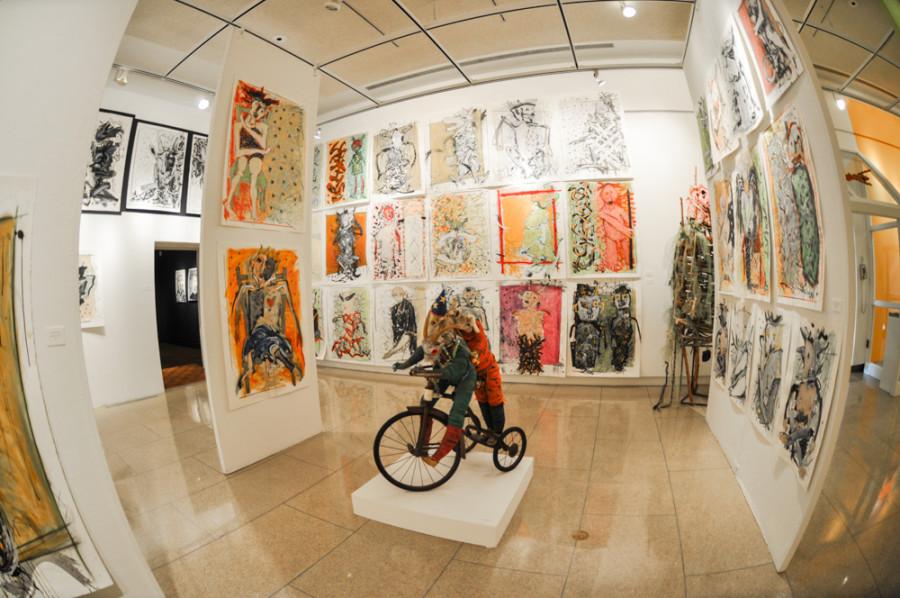 On Oct. 14, Whitman College’s Sheehan Gallery opened its latest exhibit, a reflection on the works of the local artist J. Frank Munns, who passed away last January.

The exhibition process varies by artist, but this display is distinctly different from most others. While most exhibits revolve around a central theme, this new exhibit is more of an overall look at a lifetime of work, albeit an abbreviated one.

“Since this is a retrospective, it’s kind of an overview of his entire life,” said Director of the Sheehan Gallery Daniel Forbes.

As Munns had his studio based in Walla Walla, the pieces for this exhibit were easier to collect. Rather than having pieces gathered from all around the world, most of the exhibit was already in town.

“He was kind of an anomaly in that he didn’t sell all of his work,” said Forbes.

The Gallery started planning the exhibit back in January after the passing of the artist. However, exhibits of this scope usually take much longer.

“It’s probably more along the lines of a two-year project for something of this scope,” said Forbes.

There are between six and 10 students on staff at the Gallery, and they put in a lot of work for such a lengthy process. Ideas for exhibits come up in a variety of ways. Sometimes they are recruited, proposed by faculty or even curated by students. As exhibits require such extensive research, Forbes was able to speak at length about Munns, his life and his work.

“He was quite a remarkable individual,” said Forbes.

A well-rounded academic, Munns earned a B.A. in classics, a masters in Latin, a masters in classical archaeology and an M.F.A. in sculpture and painting. He also worked at Whitman as a lecturer of art history, and served as the director of the Sheehan Gallery from 1976-1983.

In the 1950s, Munns had a profound experience that would affect his work and life outlook for the rest of his life.

“His dad decided to pack everything up and drive everyone to Mexico City for vacation,” said Forbes. “That exposure to markets and to culture had a profound effect on him, [spurring his interests in anthropology and iconography].”

“He sort of was a gatherer and drew influences from all different kinds of places,” said Forbes, “There is a lot of history in this exhibition.”

One of Munns’ intense influences was his most significant partner, a gentleman named Elie José, who eventually passed as a result of AIDS.

“[José] passed away in the 1980s –– a victim of the AIDS crisis … Like a lot of people who survived that ’80s and ’90s epidemic, that tension between life and death had a profound effect on him,” said Forbes.

The exhibit features a lot of morbid imagery, but the most emotional part of the collection is a series of drawings Munns drew of José on his deathbed, which was “part of his process” of moving on. Munns would cut up larger art pieces and repurpose their parts in new works, but even though one of the pieces on José is part of a larger work, he couldn’t bring himself to separate it completely.

The collection also has more playful notes, such as with the “Hound Alcove” or “English Bull Terrier Room.” Dogs are used in art as a symbol of fidelity, but Munns plays with those conceptions with some of his more suggestive titles in the alcove. He had three English bull terriers over the course of his life, and they eventually became recognizable signs that Munns was in town.

“When he was in town, you could always see them at Starbucks, him and his bull terriers at about 5:30 or 6 in the morning,” said Forbes.

The exhibit also features a lot of sculpture pieces, many featuring an animal skull motif drawn from Munns’ interest in shamanism, and even video components that show some of Munns’ performance pieces.

Today, Thursday, Oct. 17, the college will permanently install two life-sized bronze figures adjacent to the entrance of Maxey Hall, similar to sculptures in the exhibit, forever immortalizing Munns’ work as a fixture of the Whitman community.