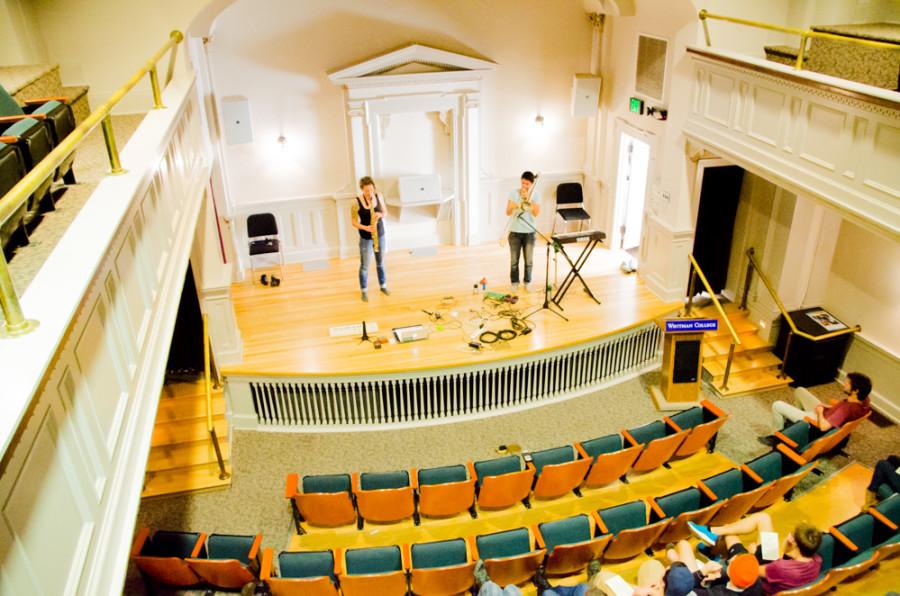 Two and a half years after forming Syrinx Effect, the dynamic duo from Seattle consisting of Kate Olson and Naomi Siegel has already played at multiple Earshot Jazz Festivals and toured all over the country. With largely improvised music using a variety of unconventional techniques, no two performances are alike.

The name of the band, Syrinx Effect, is derived from the organ of a bird, the syrinx. As the avian equivalent of the larynx, the syrinx allows birds to produce both high and low tones. Because the duo plays both the tenor trombone and soprano saxophone simultaneously, creating a similar duality, the name stuck.

“We wanted to have an outlet for our interest in adding electronics [to music] … [Syrinx Effect is] a smaller group where we felt like we had full artistic control,” said Olson, reflecting on her reasons for teaming up with Siegel.

The duo manages to achieve a unified yet unique sound through the interactions between their musical styles.

“We both come from similar yet very different musical backgrounds … and musical education backgrounds,” said Siegel.

In reality, the group has three members, the third being an onstage laptop hooked up to a mess of wires and peripherals that has the ability to mirror the sounds from Olson’s and Siegel’s instruments, replaying them at varied intervals to supplement their performance. Olson implements the program “MainStage” to achieve this affect, hooking up the computer to a foot-controlled keypad and letting the software do the rest.

All sorts of music inspire the group.

The band incorporates an eclectic mix of contemporary jazz, electronic and folk music styles into their work. Some of the biggest influences are the musicians the duo plays with, including Seattle composer and keyboarder Wayne Horvitz.

Since starting the group, the response has been overwhelmingly positive.

“We’ve had a lot of positive feedback,” said Siegel. “A lot of people have described our music as â€˜cinematic’.”

Fans’ encouraging response to the music has spawned suggestions on how the songs could be implemented into videos, which is an avenue the group may pursue in the future.

Because of the genre and improvised nature of the music, listeners may expect the duo’s performances to be hard to listen to with long bouts of extended technique.

“We’re not opposed to that … but that’s not our aesthetic,” said Siegel.

The group also incorporates a narrative feel into their music without relying on words.

“I think we’re always trying to tell a story,” said Olson. “We’re hoping our audience follows us on whatever journey we start on musically.”

She says that fans of the group close their eyes and feel like they’re “wrapped up in the sound.” This physicality is a goal of the group.

“We strive for a lot of textural elements,” said Olson.

To students on campus that have a similar musical drive but haven’t found the means to express it, Siegel advises that you “just keep playing, try to meet people and don’t be shy about what you’re doing.”

“One thing that I really value about this project is that we keep pushing each other’s boundaries both as individual musicians and as a duo,” said Siegel.

If you can’t find the motivation to branch out on your own, Syrinx Effect recommends you find a like-minded partner.

“It’s an opportunity to really grow as a musician,” said Siegel. “But you can only get to that point if you share yourself or your stuff with somebody and put yourself out there. Even if it is a solo project, just do it.”

Syrinx Effect played last Friday, Oct. 4 at Kimball Theatre and will continue touring through Washington until they arrive at their home in Seattle.