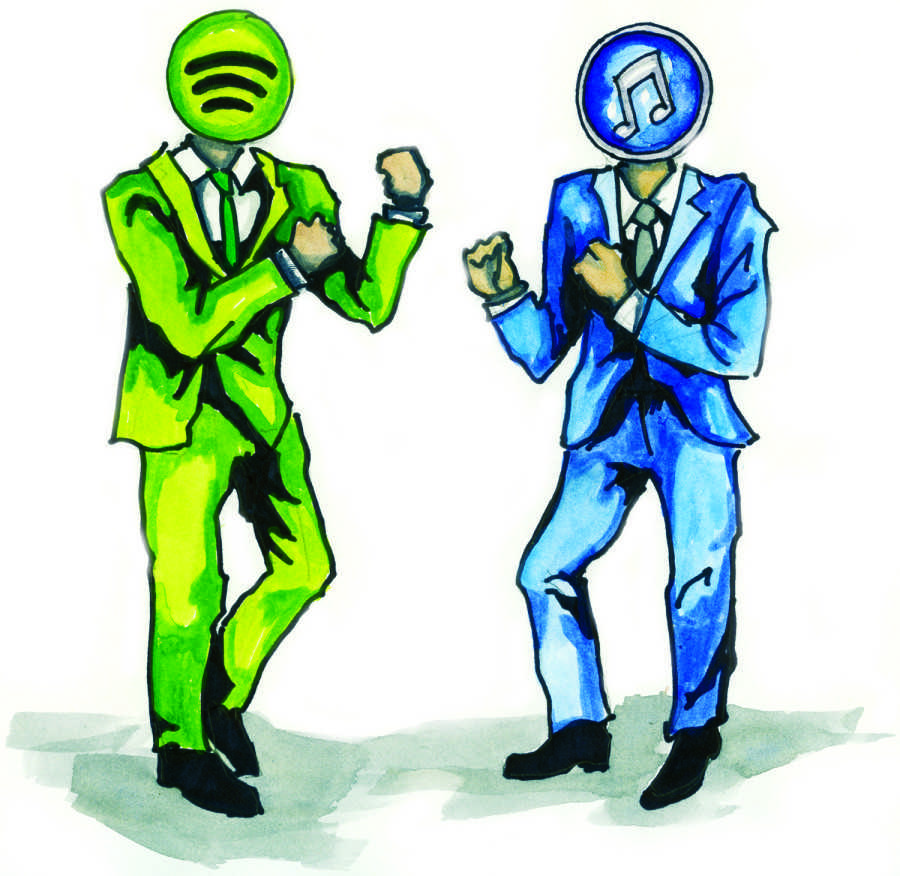 The evolution of digital music has come a long way. In the early millennium, names like Kazaa, Limewire and Napster dominated the arena. But they soon lost momentum as government and entertainment groups began to prosecute them for their free, illegal sharing. Then came the rumors that implication in the use of these applications could mean legal action against regular civilians. This pushed many to switch over to legal options –– iTunes, Zune and Rhapsody. During this time period iTunes thrived as the service with the easiest user interface and the most efficient, stylish product, the iPod.

Lately though, Apple has been confronted with a competitor that actually holds its own against the technology powerhouse: Spotify. By wrangling customers in with a free service that allows them access to (almost) any song, album and artist known to contemporary pop culture, Spotify has effectively changed the climate of modern music acquisition.

“Spotify gives you instant access to a much broader range of music than you’d otherwise have access to,” said sophomore Theo Henderson.

For many Whitman College students, music is about finding artists that establish a niche and identity; Spotify makes this achievable.

“With little to no income, it is very difficult to find spare change to spend on music from iTunes at a price of $1.20 per song,” said sophomore Daniel Kim.

This is the caveat for most cash-strapped students when considering whether to use iTunes or Spotify. Spotify is not without its own catches: The free version of Spotify is plagued by persistent advertisements. Weirdly enough, for most people this isn’t a deterrent. The biggest con regarding Spotify is that unless you pay $10 a month, you can never have Spotify on a periphery device. In a society dominated by smart phones, this means no workout music, no DJing at a party on Friday night and no road tunes. Some even think these caveats don’t matter, especially when $10 are the only thing between you and these privileges.

“If you wanted, you could literally listen to a million albums a month,” said sophomore Griffin Sutich. “On iTunes you could pay $12 for a Britney Spears album from 2008 and never listen to it again for the rest of your life.”

Despite an emerging cohort of loyalists, Spotify is not yet the new king of the hill as iTunes still wins in one vital aspect: ownership. Spotify only gives you access to the songs it provides –– it doesn’t guarantee a lifetime ownership, unlike iTunes which allows you to back up your purchases to a hard drive that, if you are a responsible citizen, can be yours for the rest of your life.

Regardless of which you choose, no one can deny the way in which these businesses have changed the climate of music –– some, those who value an organic listening-through of a whole album, might say for the worse. Others who appreciate accessibility to so many artists, musical diversity for the average listener and more business for the average artist would say for the better. The world of music is changing and these changes are having profound effects on the way we find, purchase and appreciate music.