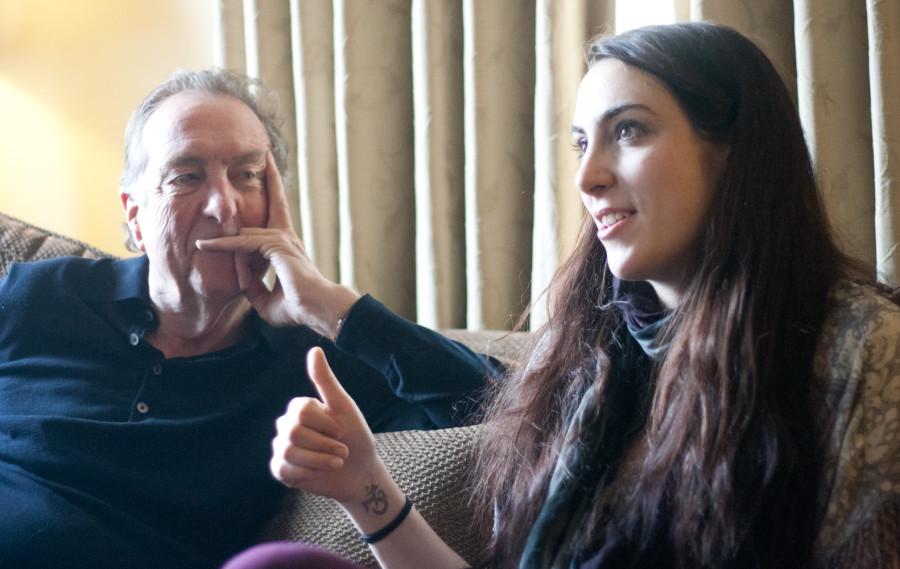 Eric Idle: Only if they’re dead. I don’t like to sign living body parts â€¦ What made you say that?

Pio: To me, it seems that celebrities are always signing body parts.

Eric: I’m not really a celebrity; I’m just vestigially left over from doing stuff from before. (Laughs.) I try to not to be a celebrity as much as possible.

Pio: Do you want to give us an idea for what your commencement speech is going to be about?

Eric: No! (Laughs.) I’ll write it next week. I’m finding out the logistics and see[ing] what’s going on. After that I’ll concentrate on it. I’ve never written one before, I’ve never been to one. I have no idea what they’re aboutâ€¦

Pio: Neither have I.

Pio: They don’t have those in England?

Eric: At Cambridge, you have to kiss the vice-chancellor’s fingers. But I missed out on that, ’cause I was doing a matinee. I don’t want to kiss a strange man’s fingers anyway. Only graduations I’ve been to [are Lily’s] kindergarten, junior school and high school. I gave the same speech at all three.

Pio: What was that speech?

Pio: Perhaps I should talk about cricket.

Eric: I get a degree for this, you know. It’s rather nice of them to do that.

Pio: What are your favorite memories growing up with each other?

Lily Idle: I think that I have a lot of fun memories of the pirate filming.

Eric: She was about this high and we were filming with Leslie Nielsen. We were filming it for Sea World and Busch Gardens; I believe it was called “Pirates 4D.”

Lily: We pranked this guy at the amusement park, too. They were taking volunteers at the amusement park as sort of this interactive thing, volunteer to throw confetti on. We had practiced our timing, so we would count “one, two, three” and I would duck. [And it would go into the audience.]

Pio: What’s your favorite piece of clothing to wear on film?

Eric: There’s nothing that I haven’t worn. It’s insane. My life has been wasted getting into other people’s clothing.

Pio: What do you think about modern comedy? “South Park” is said to be influenced by Monty Python.

Eric: I don’t like animation. I hate animation, actually. I interviewed Matt [Stone] and Trey [Parker], actually, and I got to ask them questions. I love them deeply because they appeared dressed as J-Lo and someone else [who had worn the same scandalous dresses the year before at the Oscars]. They confessed they were on acid. (Laughs.) They said it was so funny until they got to the Academy Awards. Then they realized they were in full drag. It took them a half an hour to get out of the car. (Laughs.) They’re very good; I like those boys a lot.

I don’t necessarily know much about comedy, I don’t spend a lot of time watching it. Mainly because all my life for about 50 years I’ve had comedy. When we’re here, I like to go see the boys and girls. What are they called?

Pio: Did you do a lot of writing early on in your career?

Eric: I still do. It’s about writing for me. Not very fond of improv.

Pio: What advice would you give for writing comedy?

Eric: It’s fun writing, but the secret of writing is rewriting. Throw away and refine, get it down. Then, of course, you have to try it out on people. It’s about the audience and people reading it. Even if you’ve written something for print, I think it’s good to try [it] out on someone because it changes. You can think it’s hilarious and they can tell you it’s not. (Laughs.) And it’s better to find that out sooner rather than later. That would be my only tip.

I got locked into a tradition [at Cambridge] of doing comedy. When we graduated, we were grabbed right into television. I was grabbed straight into the practice of writing comedy. It was all writing and performing. You wrote something in order for you to perform it. There’s no gap between the writer and the performer, which is what I think makes [Monty] Python unique. Five or six people who write Python and five or six who act it. That’s what makes it unique.

Pio: Lily, how do you feel about your dad giving your commencement speech?

Lily: I’m really excited. My friend Tasha, her dad was the speaker at her graduation; I was always very envious. I didn’t know how to go about it: “Hi, we should have my dad be the speaker.” Way better than past years.

Eric: I said I would, but I had to ask her first, because it’s not my day, it’s her day. I didn’t want to be big Mr. Ego walking around. But then they said, “You know, you could give her her diploma,” and I said, “Aw, well, that would be a lifetime experience. I’ll ask Lily and then I’ll get back to you.” I’ve never been to a commencement. Her friend Tasha is Tasha Goldthwait, and her dad is Bobcat Goldthwait and he did a particularly brilliant thing. He just did Oprah’s commencement speech word for word.

Lily: Why, is that [why] you wanted to go to Wellesley-Hampshire college?

Pio: What’s it been like having Eric Idle be your dad? Has it changed from childhood to Whitman?

Lily: It’s been interesting, to say the least. Family gatherings and things were strange. (Laughs.) During the teen panic years I felt a little overshadowed. Then I realized my friends were friends for me, and if anyone has any ulterior motives then they’re not really worth my time. It’s been fun, an adventure. High school with “Spamalot” was a unique experience. I would go hang out backstage.

Eric: One of the reasons we moved to L.A. in the first place [was] so that it was no big deal that I was in show business. We decided if we move[d] to L.A., then everyone in one way or another was involved in it.

It worked out, it wasn’t a big deal. Don’t want to turn into mini-me.

Lily: All he said my entire life was, “Don’t act, don’t act, stay away from show business. It’s the worst.”

Pio: When was the last time you were interviewed by a college newspaper?

Eric: I don’t know, you get interviewed when you’re out promoting something. So, I guess … We went on tour in 2003, so that’s when we talk[ed] to them.

Pio: What was your favorite Monty Python film to work on?

Eric: I don’t think there was one.

Lily: If it was a movie, he probably didn’t like it.

Eric: I hate movies. They’re so boring. So tedious.

Eric: I liked doing live things, and with the Circus we had a live audience. I like doing live things and plays. You can perfect the laugh or extend the laugh, you can get them on a roll. Versus improv, which I hate. Put it all together. They’re more vignettes. Improv makes me slightly anxious because I feel for them.

Eric: I get to be the first doctor in the family [because of the honorary degree they’re giving me].

Lily: I think “always look on the bright side of life” is a good motto.