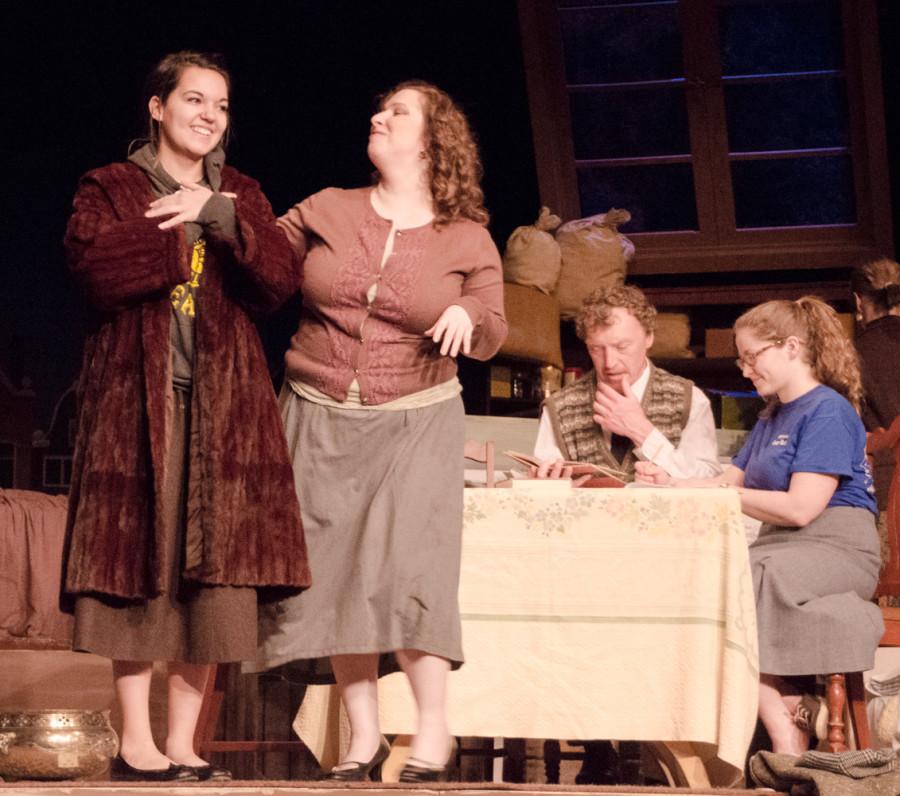 The characters Anna and Mrs. Von Don at the Little Theater of Walla Walla during a recent rehearsal. Photos by Marlena Sloss.

The Little Theatre of Walla Walla is, as its name implies, a small red building just north of Whitman’s campus. Despite its size, the theatre can boast that it has presented approximately four shows per season since it opened in 1944. Its latest show is a new adaptation of “The Diary of Anne Frank,” the well-known story of a group of Jewish families hiding from persecution in Nazi-occupied Amsterdam, told from the perspective of young Anne Frank.

Cheryl Sutlick, one of the co-directors of the play, explained that she had taught the play as an English teacher for quite a few years and decided it was time to act it out on stage. While searching for a copy of the original play, she discovered that there was a new adaptation. Sutlick explained that the differences in the new adaptation have a lot to do with respecting Otto Frank’s wishes until his death in 1980.

“There were certain things in Anne’s diary I don’t think [her father] wanted people to hear … Anne had a lot of clashes with her mother, and he didn’t want Edith to be seen in a certain light,” Sutlick said.

The new adaptation incorporates more diary entries than the original play, but Sutlick pegged the biggest difference as that the story is more genuine.

“The characters are more authentic â€¦ A few of the characters [in the original play] were sort of caricatures â€¦ [they were] seen through the eyes of a 13-year-old girl and were probably exaggerated a little. This new one humanizes all of the characters in the Annex.” She also cited the presence of the Hebrew language in the new adaptation, whereas before, all the dialogue was in English.

Robert G. Randall, the other co-director, discussed the nature of the production.

“[It was] a horrific time in our history, and a story that we should never forget,” he said.

He went on to explain that in a theatrical format, the story becomes much more personal for the audience, especially in the intimate setting of the Little Theatre. Randall explained that in order to better exemplify what the families had to go through, the actors aren’t going to leave the stage.

“The eight that lived in the Annex stay on through the intermission and everything,” he said.

When asked what they wanted the audience to take away from the show, Sutlick stated simply “a sense of hope.” She cited the popular quote from Anne’s diary: “In spite of everything, I really believe people are good at heart.”

“That’s what I want people to come away with,” Sutlick said. “Even in this horrific situation of hiding and constant fear, she lived in hope.”

Randall added that the story shouldn’t be thought of as sad. “There are some of the most gorgeous moments in this show. The Hanukkah scene, for instance.” Randall went on to describe a scene of hope where the families forget their dire circumstances.

Randall implored Whitman students to come to the play.

“I think that they’ll see a great piece of history live, and done well,” he said.