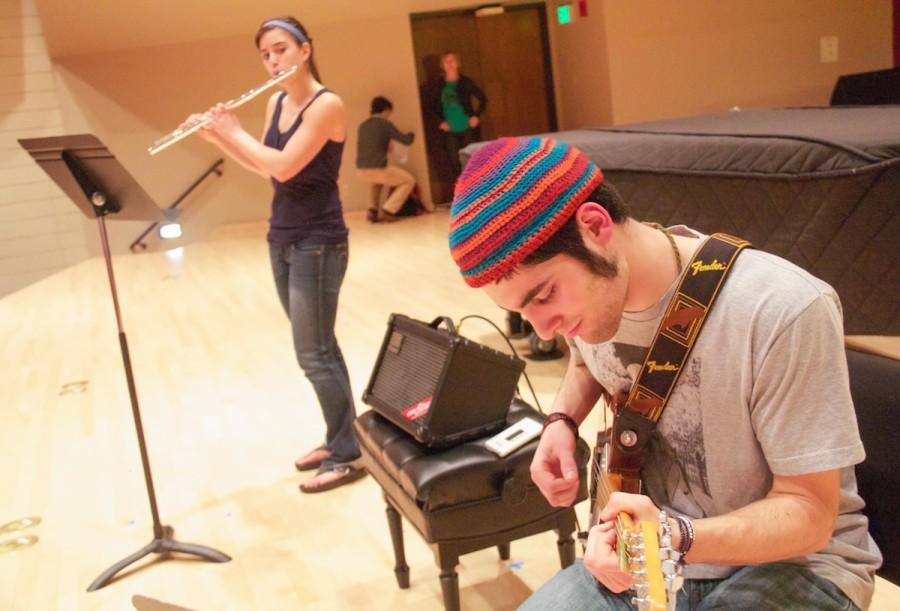 Many Whitman students dedicate hours to practicing and performing music. There are some students, however, who work to find their passion behind the scenes composing music. These burgeoning composers spend a semester perfecting their works of art in anticipation of premiering them to the public. This Friday, Feb. 22, the composers will have their opportunity to show off their music to the community at the annual Composers Concert.

The Composers Concert has been a tradition at Whitman, taking place every semester since 1999 when Adjunct Assistant Professor of Music John D. Earnest started teaching.

“I started the concert so that the composers would have a venue in which to showcase their works and to hear [them] played in public,” said Earnest.

The concert is also a treat for listeners who rarely catch a glimpse of composers and the world they write in. As Earnest explained it, the work of composers is “magical” and “mysterious” to the audience.

For Friday’s concert, each composer wrote a piece according to a theme of their choice. The titles and explanations of each piece help the audience to understand what influenced each composer’s work.

“We come from a lot of different influences, and that’s going to affect the music,” said first-year Aaron Stern.

His piece, “Three Women,” was inspired by his mother, his best friend and his girlfriend.

“They all influence me and inspire me in different ways; they’re all very unique characters in my life. They’re all creative in various ways, too,” said Stern. “My first semester project is a set of character pieces, and because music is a feminine energy, I thought important women in my life would make good subjects.”

He originally wrote his piece for three instruments, each of which would represent the different women he depicted. However, certain restrictions led him to an unusual arrangement for electric guitar and flute.

“I express their personalities through the flute. I’m represented by the guitar because it is my main compositional tool,” he said.

Stern began writing music in high school, though his relationship with music goes back much farther. The first CD he owned was an R&B/soul collection; the earliest artists he remembers hearing are Aretha Franklin and Otis Redding when he was six years old. The next CDs he owned were “best of” collections by the Beatles and the Beach Boys.

After hearing Jimi Hendrix, Black Sabbath and Led Zeppelin, Stern started playing guitar at age 10. The influence of these musicians led him on the course to joining a progressive death metal band. While playing in the band, he began writing his own music.

The first pieces he wrote were progressive death metal, yet his style transformed when he began listening to guitarist Leo Kottke. His songs started to sound like “actual music instead of the bad death metal riffs” he had previously been writing, Stern notes. He began composing more, finally helping to write songs and lyrics for The Odious, a band he played in for over five years.

When the audience hears Stern’s music at the Composers Concert, however, his style may take them by surprise.

“When people hear about a composers’ concert … they are going to expect a certain style,” said Stern. “The best thing they could do is turn off their judgment and … get into the frame of mind that they are going to hear something untraditional.”

To Stern, writing music is about more than passing a class or impressing the audience.

“It’s just intensely personal. It’s connected to my life and these really important people to me,” said Stern. “It’s very emotional; there’s a certain amount of pressure to really do all these people justice with my performance and with Jessica Shatkin, who’s playing [flute]. It’s important that she puts herself into the playing a lot … I want to move people; I want to connect with them.”

Once the audience suspends all judgment throughout the piece, Stern is interested in hearing their impressions.

“After the audience hears the pieces, then they can get an idea of what these people mean to me, who they are. If the picture they form remotely resembles these women, then I did my job,” he said.

Friday’s concert will also feature four other student pieces. Among these are junior Erik Feldman’s choral composition “Moonrise” and junior Will Ekstrom’s string quartet variations on “The Phantom of the Opera” theme.

The Composers Concert will begin at 7:30 p.m. in Chism Hall.