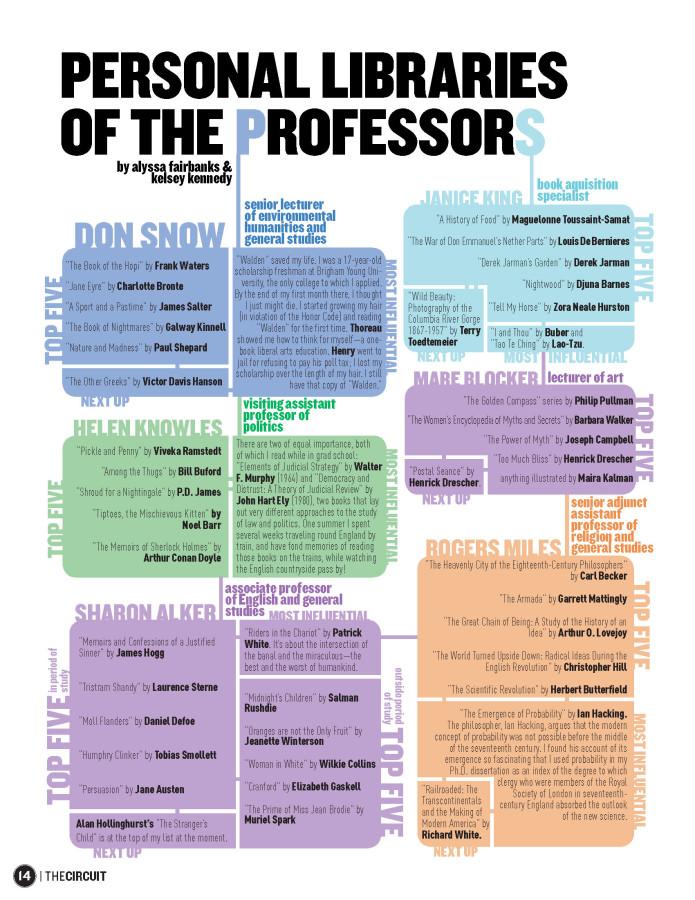 Questions:
1. What are your top five favorite books of all time?
2. What was the most life-changing book you read while in college or at grad school? Why?
3. What is a book that you are eager to add to your collection?

“The Book of the Hopi” by Frank Waters

“A Sport and a Pastime” by James Salter

“The Book of Nightmares” by Galway Kinnell

“Nature and Madness” by Paul Shepard

“Walden” saved my life. I was a 17-year-old scholarship freshman at Brigham Young University, the only college to which I applied.   By the end of my first month there, I thought I just might die. I started growing my hair (in violation of the Honor Code) and reading “Walden” for the first time. Thoreau showed me how to think for myself: a one-book liberal arts education. Henry went to jail for refusing to pay his poll tax; I lost my scholarship over the length of my hair. I still have that copy of “Walden.”

3.  Next in the Collection:

“The Other Greeks” by Victor Davis Hanson.

“Pickle and Penny” by Viveka Ramstedt

“Among the Thugs” by Bill Buford

“Shroud for a Nightingale” by P.D. James

“The Memoirs of Sherlock Holmes” by Arthur Conan Doyle

There are two of equal importance, both of which I read while in grad school: “Elements of Judicial Strategy” by Walter F. Murphy (1964) and “Democracy and Distrust: A Theory of Judicial Review” by John Hart Ely (1980), two books that lay out very different approaches to the study of law and politics. One summer I spent several weeks traveling round England by train, and have fond memories of reading those books on the trains, while watching the English countryside pass by!

1. Top Five in period of study:

“Persuasion” by Jane Austen (her very best novel with the best declaration of love scene ever!!! and that’s no exaggeration)

1. Top Five outside period of study:

“Oranges are not the Only Fruit” by Jeanette Winterson

“Woman in White” by Wilkie Collins

“The Prime of Miss Jean Brodie” by Muriel Spark

“Riders in the Chariot” by Patrick White. White’s novel somehow manages to be profoundly new in sentiment, while being absolutely saturated in traditional symbols. It’s about the intersection of the banal and the miraculous: the best and the worst of humankind.

3. Next in the Collection:
Alan Hollinghurst’s “The Stranger’s Child” is at the top of my list at the moment.

“The Heavenly City of the Eighteenth-Century Philosophers” by Carl Becker

“The Armada” by Garrett Mattingly

“The Great Chain of Being: A Study of the History of an Idea” by Arthur O. Lovejoy

“The World Turned Upside Down: Radical Ideas During the English Revolution” by Christopher Hill

“The Scientific Revolution” by Herbert Butterfield

“The Emergence of Probability” by Ian Hacking. The philosopher, Ian Hacking, argues that the modern concept of probability was not possible before the middle of the seventeenth century. I found his account of its emergence so fascinating that I used probability in my Ph.D. dissertation as an index of the degree to which clergy who were members of the Royal Society of London in seventeenth-century England absorbed the outlook of the new science.

3. Next in the Collection:

“Railroaded: The Transcontinentals and the Making of Modern America” by Richard White.

“The Women’s Encyclopedia of Myths and Secrets”

“The Power of Myth” by Joseph Campbell

“Too Much Bliss” by Henrick Drescher (it’s hard to pick one!)

anything illustrated by Maira Kalman

Next in the Collection:

3. Next in the Collection: