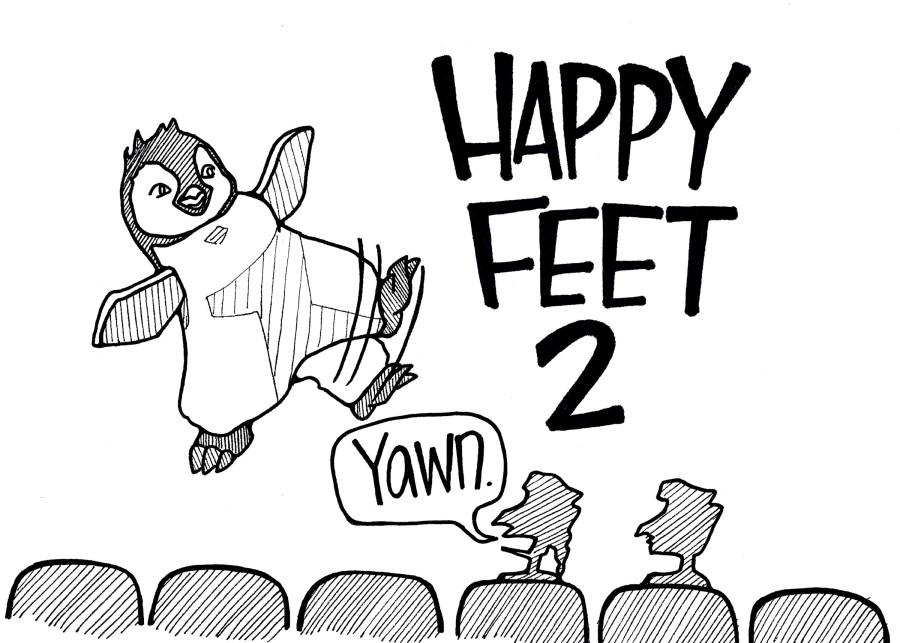 Little baby penguins singing and dancing are only cute for so long. “Happy Feet Two” tries to rekindle the love of the first dancing and singing penguins movie but falls flat like a penguin trying to fly.

The main plot of the film follows Mumble (Elijah Wood), now a grown-up, and his son Erik, who, unlike his dad, cannot sing or dance. Similar to the first movie, “Happy Feet Two” takes on the issue of global warming, and as the ice melts, all of the emperor penguins become trapped behind a wall of ice. Animals and humans come together, singing and dancing, to save the penguins but not the movie.

Although the movie’s main characters are stale and dull, the smallest creatures, the krill, steal the show. Will the Krill (voiced by Brad Pitt) with his best friend Bill the Krill (voiced by Matt Damon) try to move up the food chain because Will finally wants to “chew on something with a face.” While the krill were my highlight, the krill jokes and entire purpose in the movie seemed haphazard and thrown together. “Happy Feet Two” tries too hard, and the music and dancing simply do not have the same effect as five years ago. A movie that is trying to blend music into the story should not have the best songs be an opera sung by a baby penguin, “We are the Champions” sung briefly by Pitt, and Damon trying to sing “Wake Me Up Before You Go-Go.”

Big-name stars try and fail to salvage the film. Robin Williams, reprising the roles of both Lovelace and Ramon, falls flat. Sadly, Lovelace and Ramon sound as if they are both voiced by the same person. Hank Azaria (“The Birdcage”) adds his wonderful voice as the Mighty Sven, a fraudulent puffin who pretends to be a penguin who can fly. Unfortunately, even these talented voice actors are unable to save the movie from crashing.

“Happy Feet Two” is admittedly targeted toward the younger demographic, but not even my inner child found much of the movie entertaining except for the krill: they were one in a krillion. Yes, just like the flat krill jokes, goodbye krill world, and goodbye “Happy Feet.”