Dabbles in Bloom brings diversity in life, music to campus 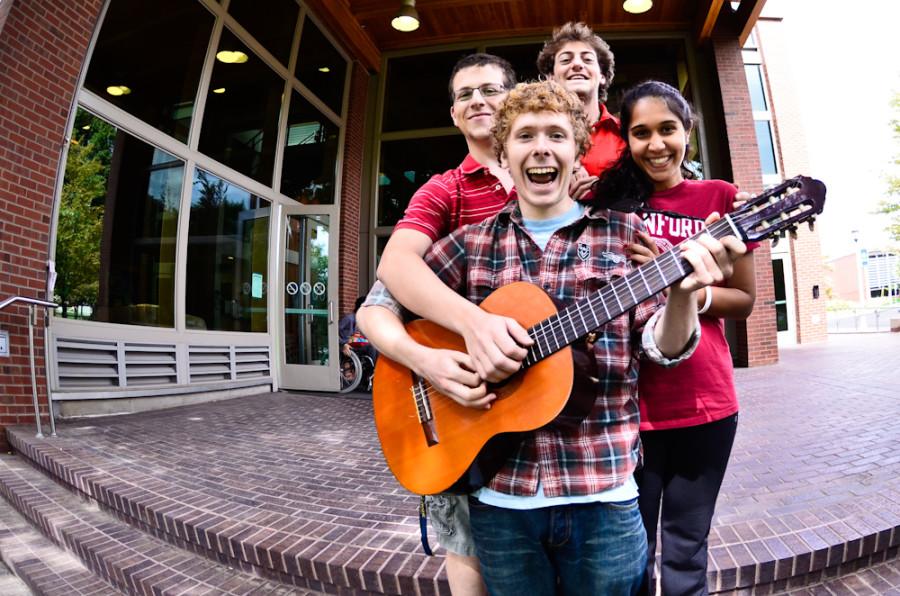 At the crossroads of culture and musical styles thrives a campus band known as Dabbles in Bloom. The foursome is composed of two Whitman seniors––lead vocalist and guitarist, Adriel Borshansky and vocalist and percussionist, Rimmy Doowa––and two juniors, drummer, Robby Seager and bassist and keyboardist, Jonas Myers.

The band members try to transcend narrow, restrictive musical roles. All four contribute vocals, all four can play some guitar. Doowa is a true multi-instrumentalist, with a wide range of exotic instruments and influences in her repertoire.

“I try to incorporate Indian classical raag,” said Doowa. “We’ve used some Hindi words, but mostly it’s just Western singing. I play the saw duang and the harmonium, which is like the Indian version of piano, and the tabla, Indian drums. You hear [tabla] a lot now because they’ve incorporated it into all kinds of hip-hop and Western music. There’s been a lot of fusion in tabla, and a lot of things.”

This philosophy of fusion extends beyond their influences to the way in which Dabbles in Bloom balances the demands of the band with their academic obligations.

“It’s always kind of hard balancing the two, but we’ve figured out ways that music can feed into what we’re learning in school, and vice versa,” said Borshansky.

“Finding synergy between––not just doing work, but kind of living whatever you’re working on, and that also goes for music,” said Seager. “Combining homework time and music time, not only sharing music with each other, but sharing interesting things that we’re learning. Instead of trying to accomplish both by segregating them, like doing homework so I can go to band practice, kind of trying to have the attitude that it’s all an integral part of what we do here at Whitman.”

“He’s a good friend of ours, especially Jonas and myself,” said Seager.

As to the nature of the video projects, the band remained mysterious.

“Some secret things are in the works,” said Borshansky. “Some global music outreach.”

The four took to the road this summer, with a tour of Northwest cities, and are looking forward to bringing their live act back to Walla Walla.

“We played in Seattle, Portland, Eugene, Astoria, Seaside, a bunch of places, and Folklife was one of the stops,” said Borshansky. “We’re hoping to do some Coffeehouse shows, and shows off-campus. We’re slotted to play one show around Halloween, in downtown––Sapoli––and maybe in Pendleton.”