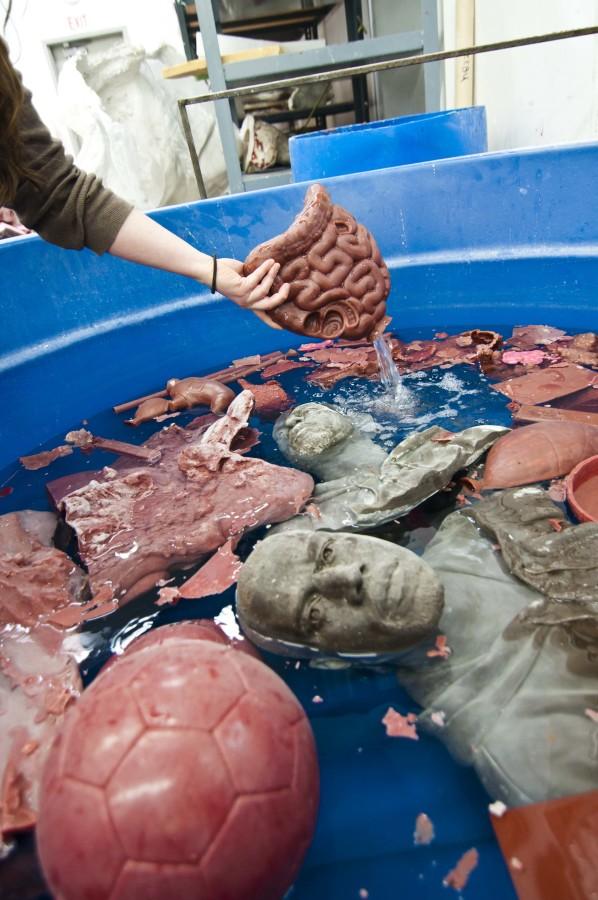 Various artists working out of the Walla Walla Foundry use wax models as intermediates for their sculptures. The floating bust is Kanye West. Credit: Kendra Klag

Current projects listed on the Foundry’s web site include works by Maya Lin, designer of the Vietnam Veteran’s Memorial in D.C., Matthew Barney, creator of the Cremaster Cycle film series, and Kiki Smith, known for her feminist body art. With these local, regional and international artists, and with an average of 100 projects going on at any one time, there is a wide scope of works that the foundry makes possible.

But right here on the local level the Foundry’s impact is felt. Anderson, who graduated from Whitman with a major in studio art, knows the rigorous schedule constraints that keep Whitman students from taking advantage of the Foundry’s capabilities.

“The Whitman experience is so intense that even though the Walla Walla Foundry is here locally, it seems at this point almost unlikely that there are many students or even the faculty have time or reason to get involved. Not that we wouldn’t like that to happen, it’s just that I think the schedule is so jam-packed,” said Anderson.

Whitman studio art faculty, however, often take classes on tours of the Foundry and some even base projects around those visits.

Kynde Kiefel, exhibitions and collections manager for Sheehan Gallery, feels there is an additional connection between Whitman and the Walla Walla Foundry.   Before coming to Whitman she worked at the foundry doing photography and special projects, and her husband Jeremy is the Wax Room Manager there.

“The parallel [between Sheehan and the Foundry] is that they’re different versions of bringing ideas to fruition,” said Kiefel. “The Foundry is the translation of ideas into this ultimately permanent physical form and then here it’s translating the translating â€¦ designing the best way to show those ideas that would benefit people, students and the community.”

“I believe Walla Walla is a much richer place today than it was when I was a child, or even when I was a Whitman student,” said Anderson.

The Foundry’s presence in a small community like Walla Walla may seem miraculous, according to Kiefel.

“Hang out here awhile, [though,] and you see there’s a lot of really great artists and a lot of exciting inventive things happening,” said Kiefel. “And [Whitman is] lucky; we get to see it from the inside : we know this is a rich place. The foundry is part of that too, of making this a really evolving community and evolving artistic place.”